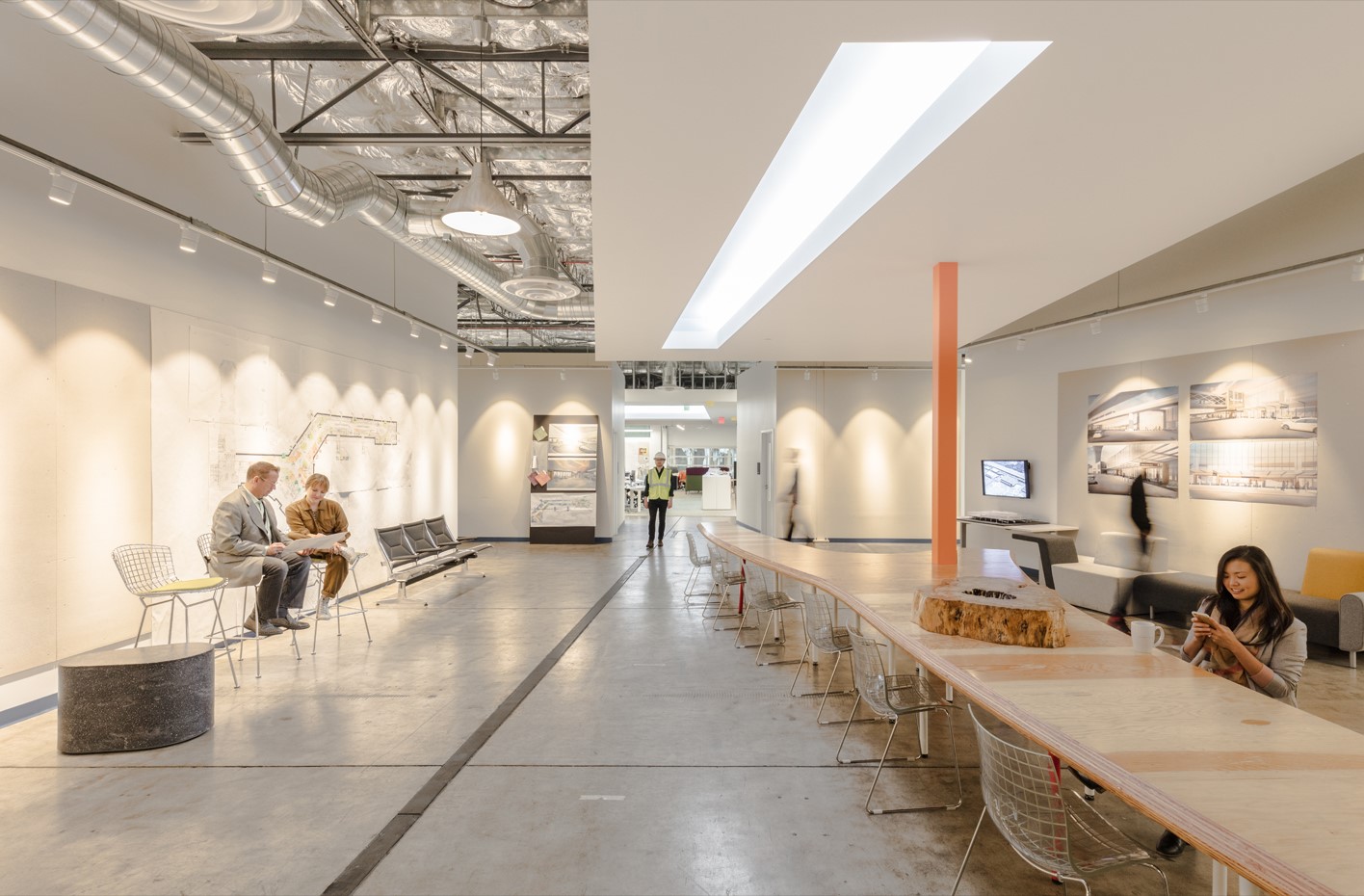 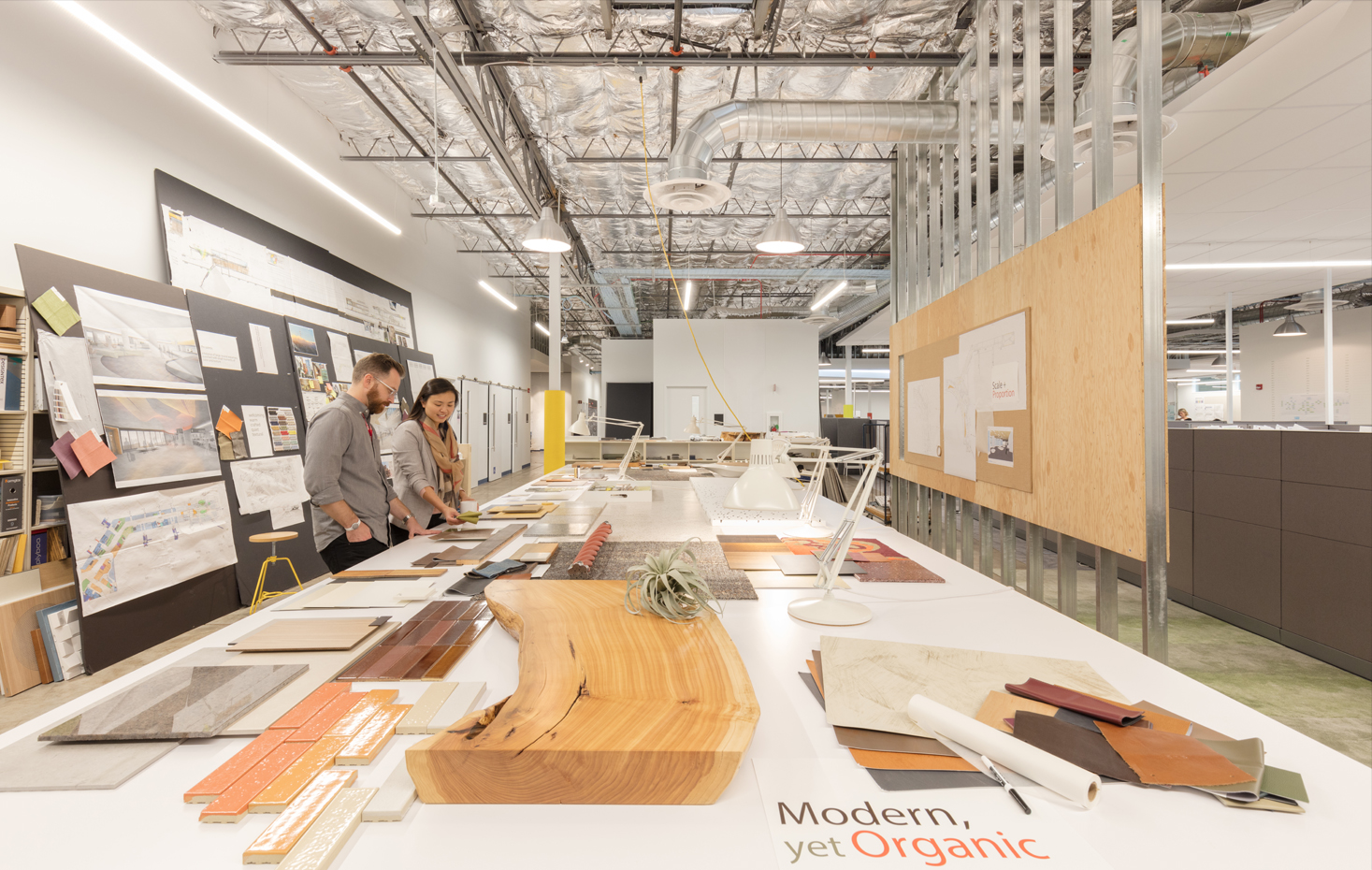 A Conversation with Michael McGroarty, Ophelia Wilkins, and Ethen Wood

Q: Before we get into talking about the Big Room and what it is, let’s talk about the project it was built for.

Michael McGroarty: We’re part of a large team that’s renovating Terminal 1 at San Francisco International Airport (SFO). It’s a massive project. And when we say “renovating,” we mean tearing down the 1960s-era terminal in stages and completely rebuilding it, from the International Terminal building all the way to Boarding Area C. The project encompasses more than a million square feet.

It’s so big that SFO split the work between two design-build teams. The Terminal 1 Center renovation is led by contractor Hensel Phelps with Gensler and Kuth Ranieri Joint Venture, and the Boarding Area B renovation is led by contractors Austin Commercial and Webcor Builders working with HKS, Woods Bagot, ED2 International, and Kendall Young Associates.

Ethen Wood: Terminal 1 Center is one segment of the ring that goes around the airport’s central parking structure. In layman’s terms, it includes the pre-security, ticketing, security, and recompose areas on one level, and then below that is arrivals and all the back of house baggage. That’s the entire joint venture scope. Then within that, we had more specific sub-areas to focus on.

Q: So, what is the Big Room, and why was it built?

Michael: Keeping everyone on the same page—contractors, architects, engineers, and all the other consultants—is no easy task, especially when the goal is to make the new Terminal 1 aesthetically cohesive. SFO has done enough of these kinds of projects by now that they realize that face-to-face interactions are crucial, even in the age of purely digital communication. Hence, the Big Room.

Ophelia Wilkins: The Big Room concept is becoming more common as the AEC profession moves toward greater collaboration between design team and contractors. Megaprojects like Terminal 1 are leading the way, because with projects this big, when things go wrong, they can go really wrong.

Michael: The basic idea of the Big Room is to make a physical gathering spot where the team’s members can collaborate, communicate, and work more efficiently together. As we’ve found, walking over and talking to the contractors every day is totally different from just talking to them on the phone every day. Physically occupying the same space makes for a more amicable relationship between designers and contractors.

Q: Who created SFO’s Big Room, and what does it look like?

Ophelia: We teamed up with Gensler to design it, working with Gensler’s principal Melissa Mizell, lead designer. It’s a freestanding, 16-foot-high, 30,000-square-foot pavilion that occupies a small portion of an enormous airport hangar that has a 65-foot-tall ceiling.

Ethen: Adjacent to the hangar is an existing office building where a lot of the SFO team currently works, so they’re in close proximity to us, but they can leave and work in their own space too.

Ophelia: People who are familiar with the Big Room concept have said to us that the one we have created at SFO is the best they’ve seen, because it was designed with the work environment in mind. The typical Big Room is just a large vacant room that’s filled up with desks, completely ad hoc. The one at SFO draws on extensive research on workplace design. It’s designed to be a highly collaborative open office space with different spaces to support a range of levels of privacy, from small breakout spaces to medium-sized and large rooms for cross-disciplinary meetings, to open-plan workstations for about 200 architects, engineers, contractors, and consultants.

The heart of SFO’s Big Room is the kitchen, which has a long, quirkily shaped dining room table surrounded by pin-up space. This is where most of the charrettes and client reviews happen. It also serves as a flexible community pin-up space, so everyone can see the progress that other members of the team are making.

Michael: That’s one of the benefits of the Big Room: when you print something out and put it on the wall, everybody can see it. As a result, there is a high degree of transparency in the design process. The designers don’t sequester themselves.

Q: How do you all work together with so many moving parts?

Ethen: At the beginning of the Terminal 1 Center project, we sat down with Gensler to divvy up our piece of the work and figure out how to balance collaborating together and working separately. Of course, because it’s such big, complicated project, even if you’re technically only responsible for one portion of the building, you can’t just separate that out from the rest. If you’re working with a baggage line or a mechanical system duct, you have to know where it’s coming from and going to.

In the beginning, there were a whole bunch of design charrettes, some with our Kuth Ranieri and Gensler team, others with Gensler, Kuth Ranieri, HKS, and Woods Bagot, to come up with the spirit of our process of working together. And then everybody went off to focus on their piece. There were a series of periodic chats where everybody came together to each present their work. That meant that the Gensler Kuth Ranieri joint venture could see what the HKS Woods Bagot team was doing and vice versa.

The Terminal 1 Center is the doorway to the Boarding Area B and gates, so they are an interconnected set of experiences and are intended to read as one journey. The line where the Terminal 1 Center and the Boarding Area B projects meet has been a source of constant coordination, from the early phases through construction documents. The finishes and the details have to transition seamlessly, and the overall design approaches have to make sense together, even though the two projects are contractually separate.

Q: Half of Kuth Ranieri is still working at our main office in San Francisco on other projects. How do you keep the firm’s culture intact while the Terminal 1 Center project is going on?

Ethen: We have what we call KR Fridays, every Friday, when staff come back to the home base and have a meal together. I think it helps with the fact that we all liked each other before this project and—

Ophelia: What are you talking about? [Laughs]

Ethen: —hopefully for the most part after this process. There’s a good-naturedness that pervades even when we’re in sporadic contact. Ophelia and I joke about seeing each other once in a blue moon. We’ll see each other four days in a row, then not for another two months.

Michael: We’re already starting to wrap up our piece of the project, hard as it is to believe. We set it up strategically to keep both parts of the firm in touch, as Ethen was saying, so there’s always that kind of continuity. I can’t speak for everybody, but I do think that while everyone feels at home at Kuth Ranieri, I was really amazed by how well we integrated into a larger team. Most of the time, a visitor to the Big Room wouldn’t be able to have any sense of who works where, just by looking at people in the workstations, because we all working together so closely.

Ethen: The thing that surprised me the most is the capability of the Kuth Ranieri team. We sent our designers, some of whom had been with us for a while, some of whom we hired specifically for this job, and we took them from a scale of work that had historically been very small and threw them into this incredibly complicated mix, in a windowless room no less. And they’ve handled it with grace and good humor despite the high pressure. I think they’re doing really well. What’s surprised me is how the office has grown in its capability to take on this new and incredibly challenging work. That’s the real side benefit of our Big Room experience.

*Photography by Jason O’Rear and Gensler

For more information about the SFO Big Room, visit the project page.