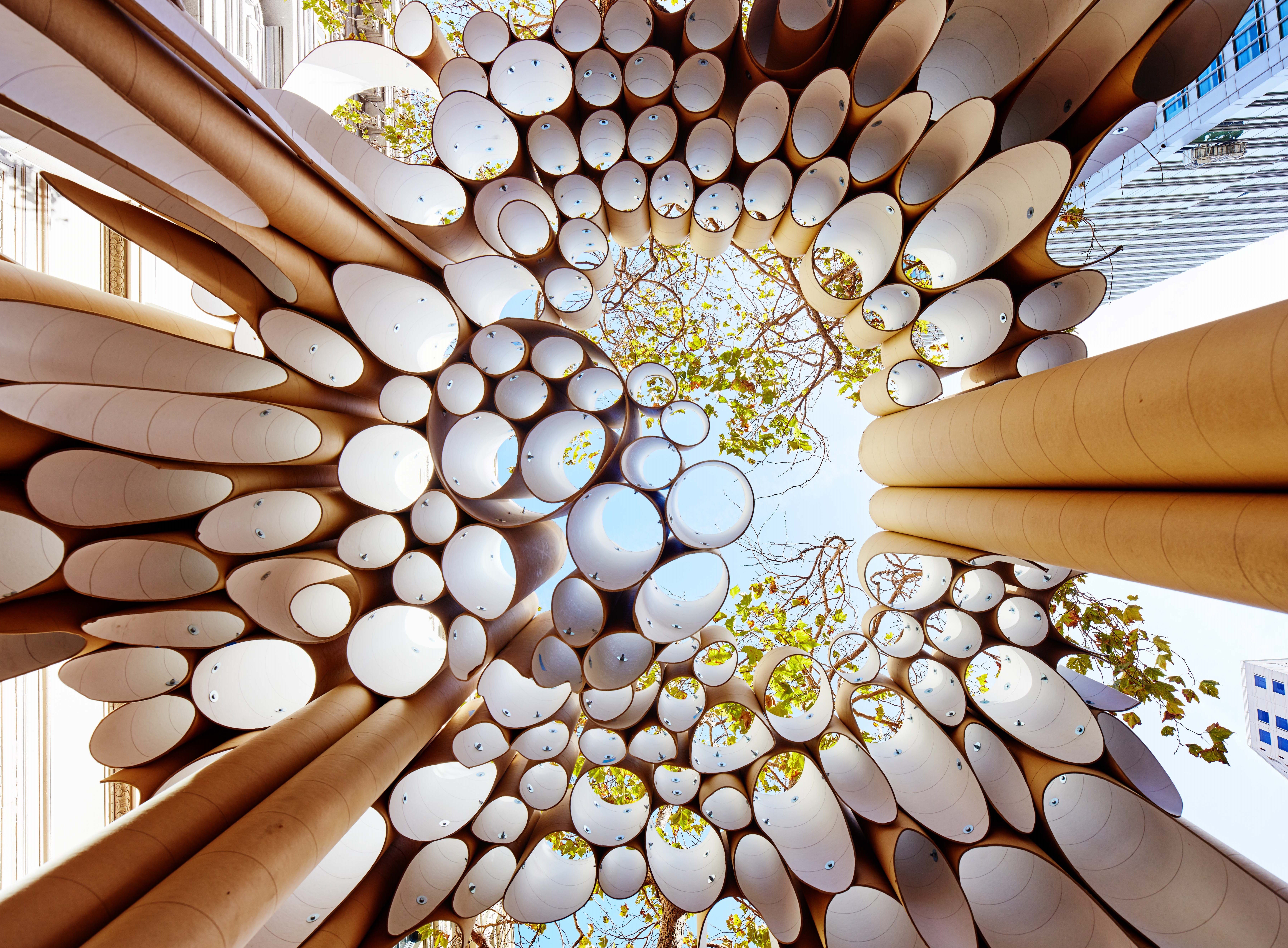 Speaking in Tubes: A Small Project Keeps a Growing Office Together

For three days in early October, the 2016 Market Street Prototyping Festival gave the public a chance to experience more than three dozen ideas for enhancing San Francisco’s main drag and creatively engaging people with the urban environment and with each other. Created by teams who answered a call for submissions last April, the installations ranged from an artistic ping-pong table to an enclosure containing homemade musical instruments to a hand-crank-powered box that distributed stories and artwork. Kuth Ranieri’s contribution, SonoGROTTO, was a pavilion made of hundreds of cardboard tubes, carved to create seats, windows, and an oculus that frames views to the sky. 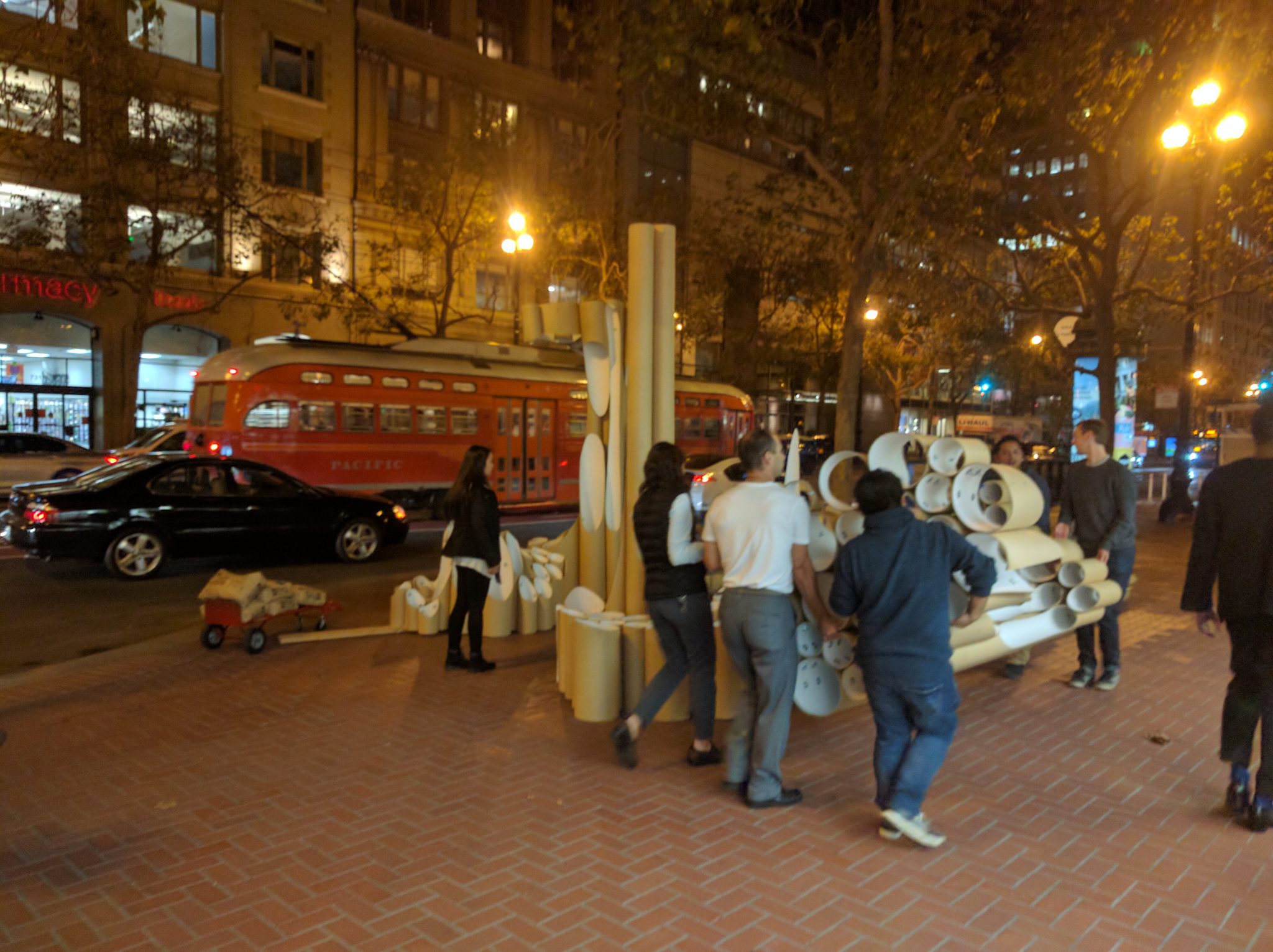 Taking on this small project provided a valuable complement to the firm’s current work on two large projects: Terminal 1 at the San Francisco International Airport (joint venture with Gensler) and the Chase Center Arena for the Golden State Warriors (Lobbies and Esplanade as Associate Architect to Gensler) in San Francisco’s Mission Bay. “Our office has grown a lot in the past few years,” says Liz Ranieri, principal of the firm. “A number of us are now working offsite at a number of locations including SFO’s Big Room”—a space the firm designed with Gensler at the airport for the Terminal 1 and Boarding Area B teams to collaborate in— “so we’re not all together in the same place as much as we used to be. We entered the competition because it was a way for us to stay connected and make something together.”

It was an opportunity for the firm’s designers to experiment at a small scale and explore a formal design language that they might not be able to in another circumstance.  “Working on SonoGROTTO was a way of keeping intact our commitment to design research and contemporary craft,” says principal Byron Kuth. “We’re keeping the office’s origins alive as we grow and evolve.”

Almost everybody in the firm worked on at least one phase of the project. “It became central to our office culture over the last few months,” says Ethen Wood, project manager. “SonoGROTTO gave us an outlet to work collectively on something with our hands and to really think about form and space with a modest program.” 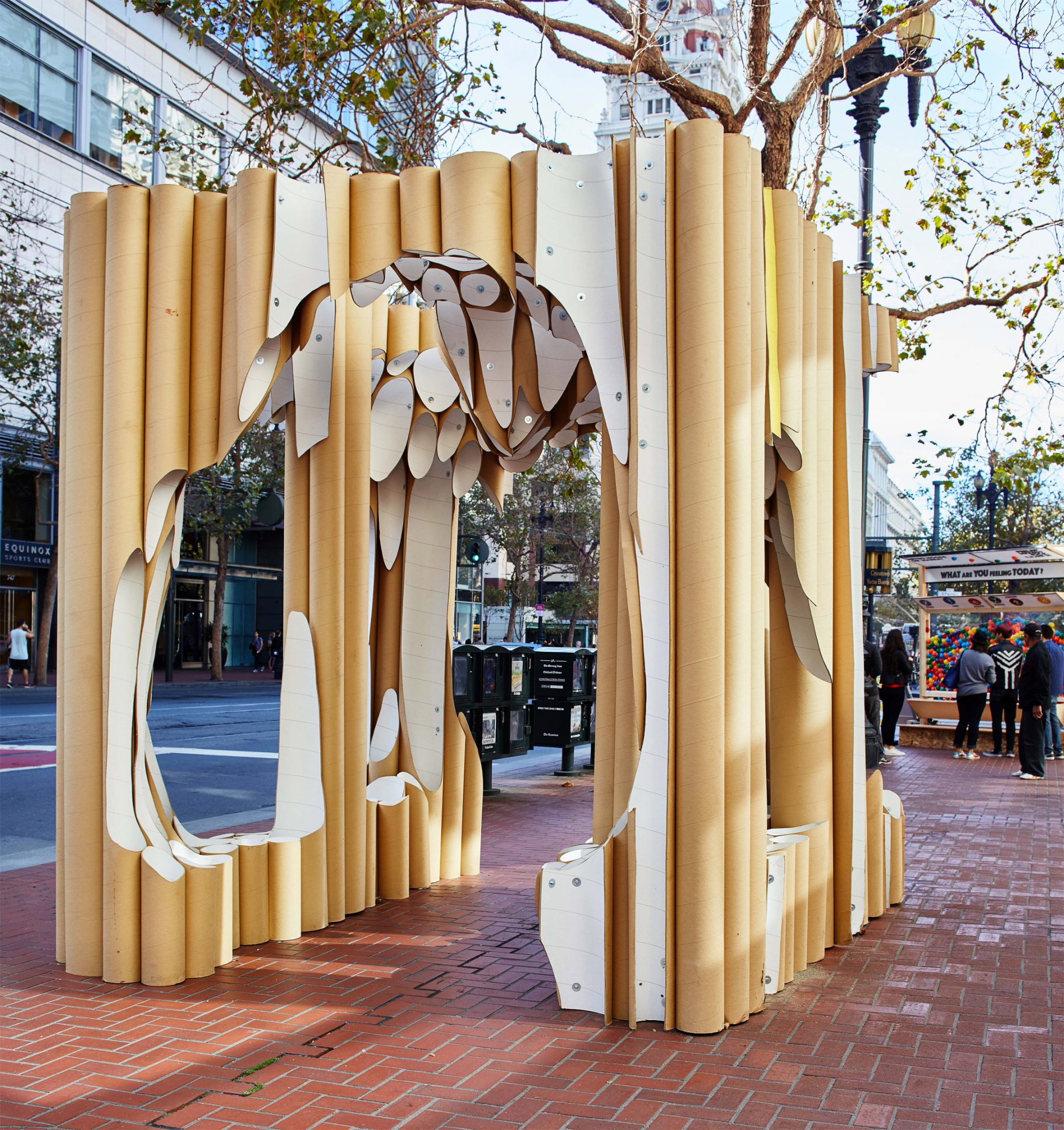 The project enabled the firm to explore ideas that have long been at the heart of its design philosophy. “If you look at the history of our work, we have had an interest in found objects from the start,” Ranieri says. “We’ve always been huge fans of Marcel Duchamp’s readymades, which gave cultural significance to everyday objects. This project is an extension of that, taking off-the-shelf building materials –cardboard tubes and bolts– and rescripting them with a new meaning.” 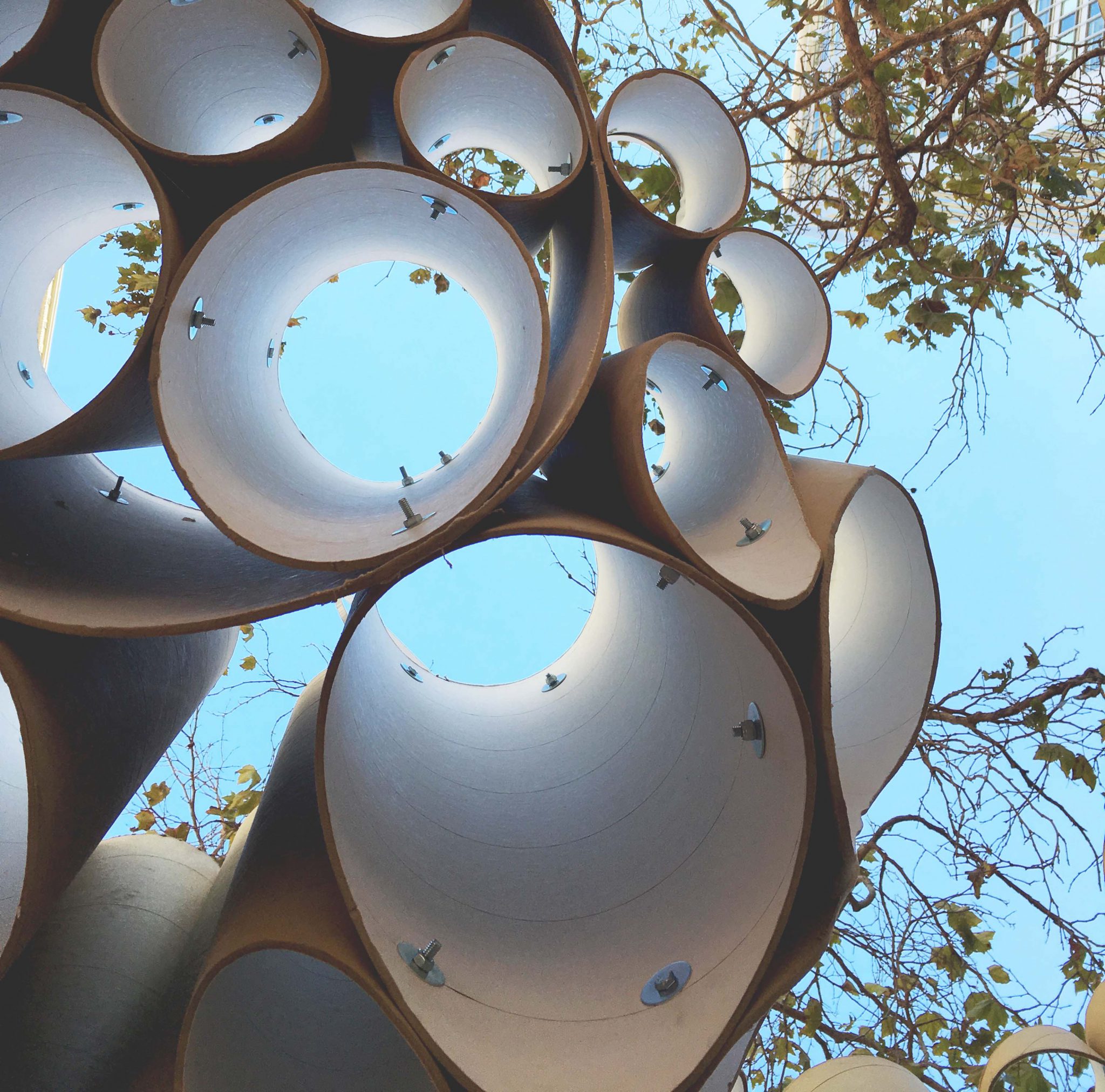 Although made of cardboard tubes that were cut by hand, SonoGROTTO was mostly designed on the computer. “We couldn’t have made something like this without the computer or the ability to create full-scale templates using a 3D printer,” Kuth says. “So it was about reintroducing technology to craft and continuing our long-established interest in research.” Ranieri calls SonoGROTTO “a weird hybrid, because we were using digital means to create the patterns, everything we needed to build it, yet it required humans hand to assemble and install it. It’s a hybrid of hands-on craft and digital craft.” 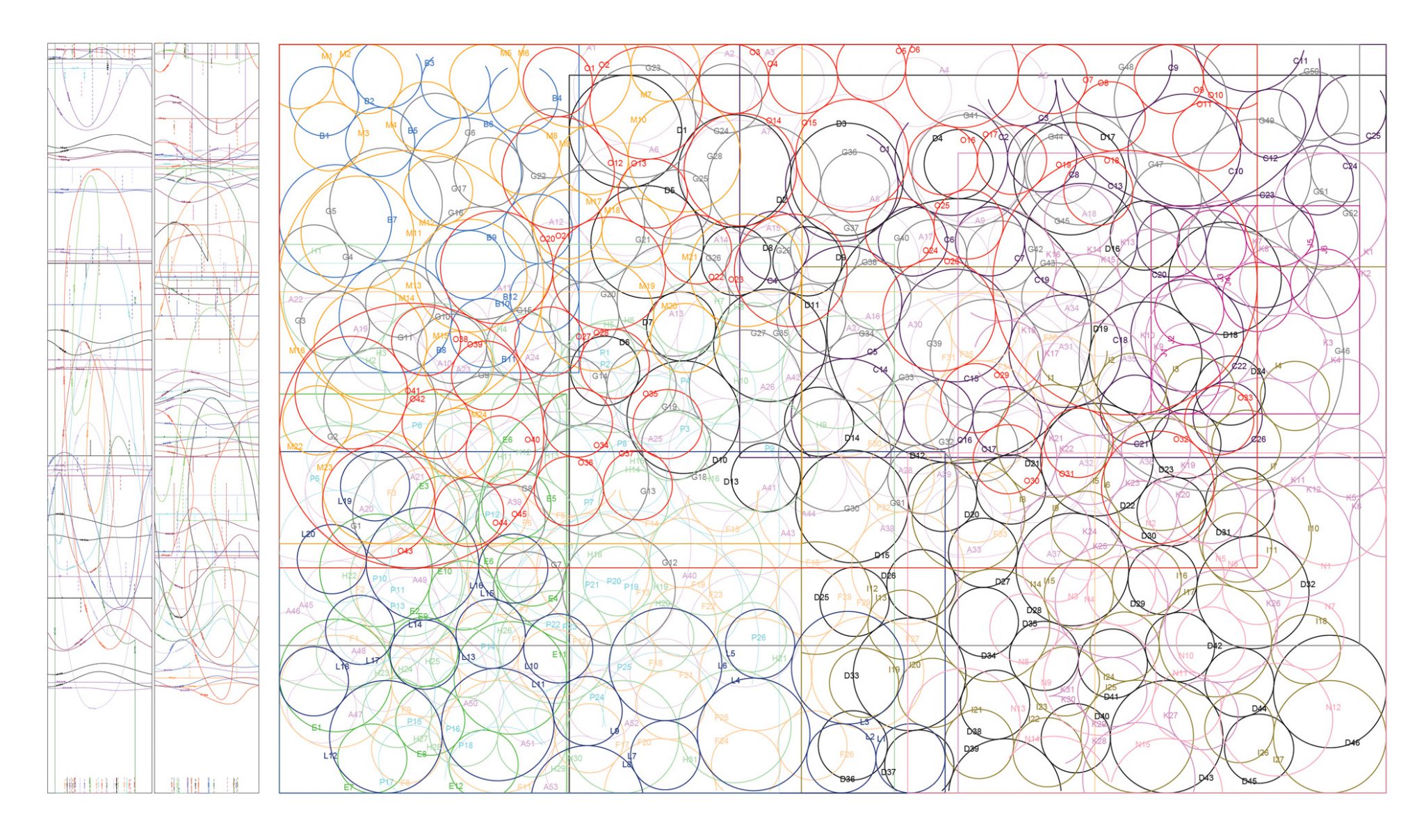 The project harks back to “The Body in Repose,” an installation Kuth Ranieri created at the San Francisco Museum of Modern Art (SFMOMA) in 1998, which also revolved around themes of the body, material, and fabrication. Like “The Body in Repose,” SonoGROTTO tells a story about itself and how it’s constructed, and it reflects the firm’s longstanding interest in architecture that relates to the human body.  “SonoGROTTO is a disciplined work, 10 feet by 10 feet by 10 feet,” Kuth says. “The configurations are organic and biomorphic. We believe architecture is moving toward a more humane dimension.” 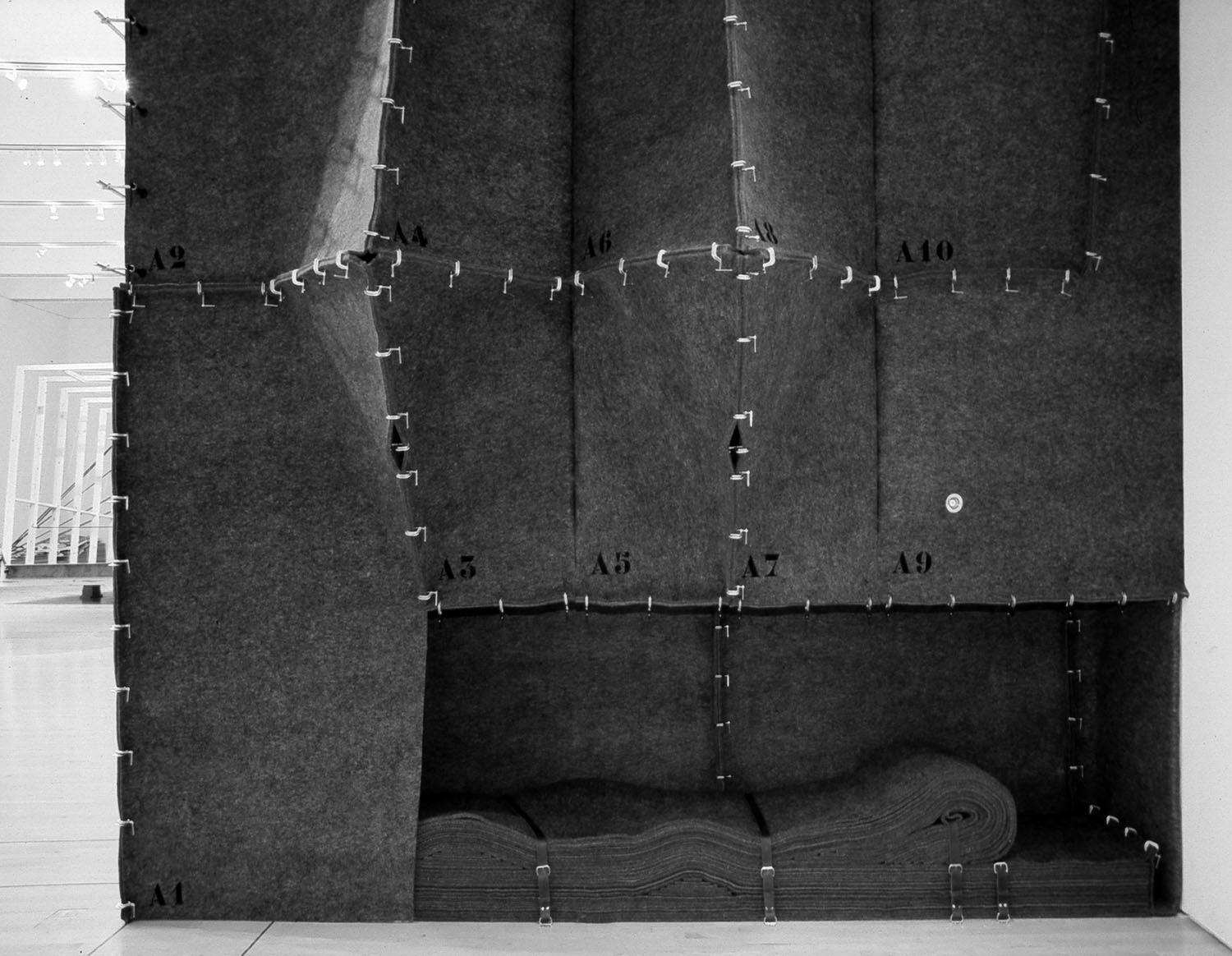 During the three days of the festival, the designers had the chance to watch passersby interact with the sculpture and talk with them about it. “In the beginning, people didn’t know what to make of it,” Wood says. “What does it do? It doesn’t do anything. It is just space.  A human-scaled space in the over-scaled canyon of Market Street. Once people started to realize that, they would look up and say things like, ‘Oh wow.’ We would tell them it was a place of respite, and they could stop for a minute and sit down and have conversations.” 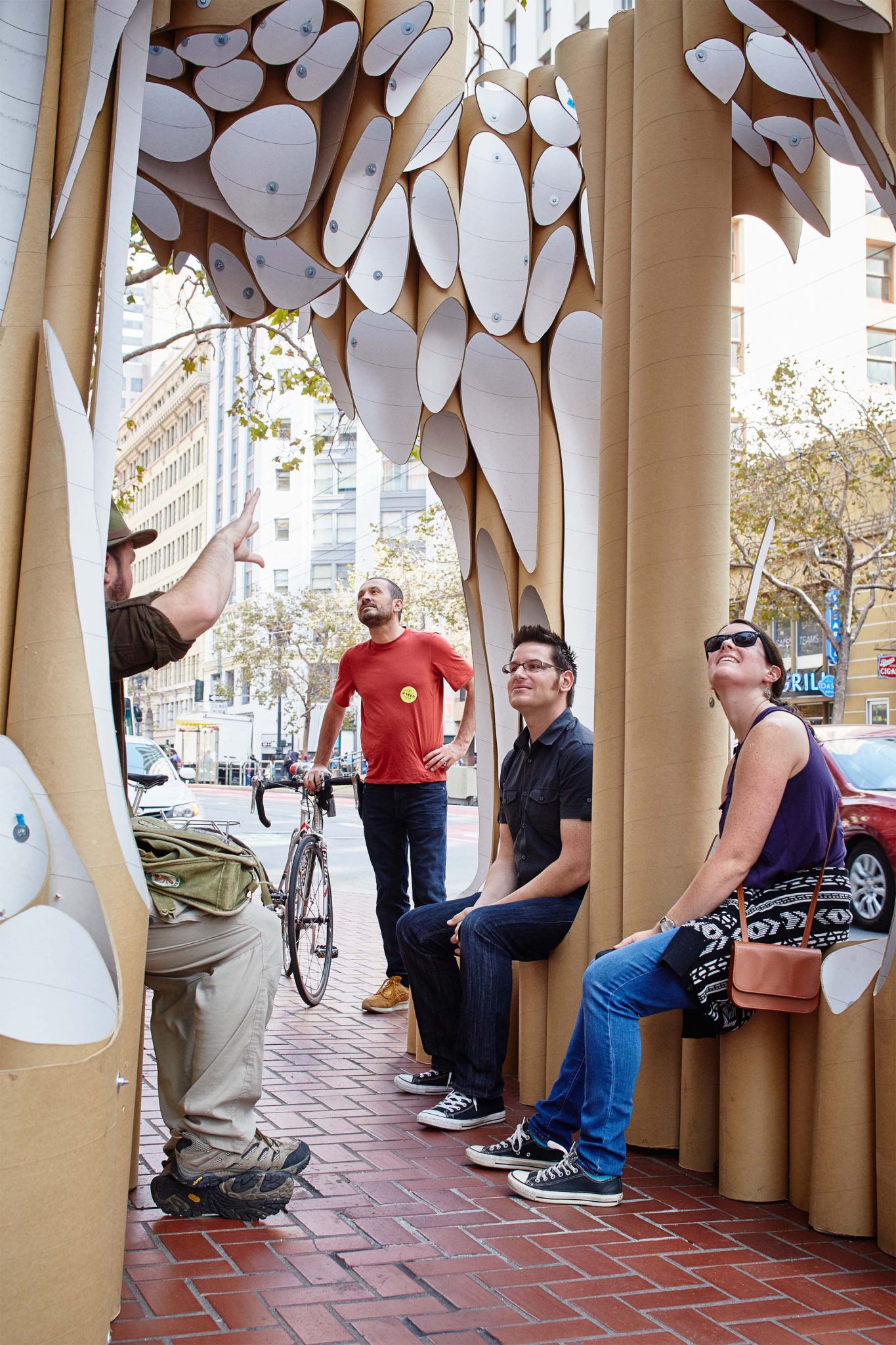 This gave the designers a chance to engage with the public in a different way than they typically are able to. “In our large-scale work for the airport or the Chase Center, feedback on the users’ experience is years away,” Wood says. “So this was an opportunity to mix experimentation with immediate feedback.”

Ranieri agrees. “It was a real community building effort to create it together, rent the truck, take it from the construction site to Market Street, install it, take turns staffing it during the festival, and disassemble it at the end,” she says. “The whole office came out to Market Street at 11:00 at night to put the pavilion up. It was like a barn raising. Once we were here, it all went up quickly. Doing something like this builds camaraderie.”

Although the festival only lasted three days, SonoGROTTO lives on. Recently, SonoGROTTO was named a Market Street Prototyping Fesival’s People’s Choice Award winner. Currently, the reassembled pavilion lives at SFO’s Big Room. The San Francisco Planning Department and the Yerba Buena Center for the Arts, which sponsored the Festival, will select five of this year’s designs as incubator projects to develop further. 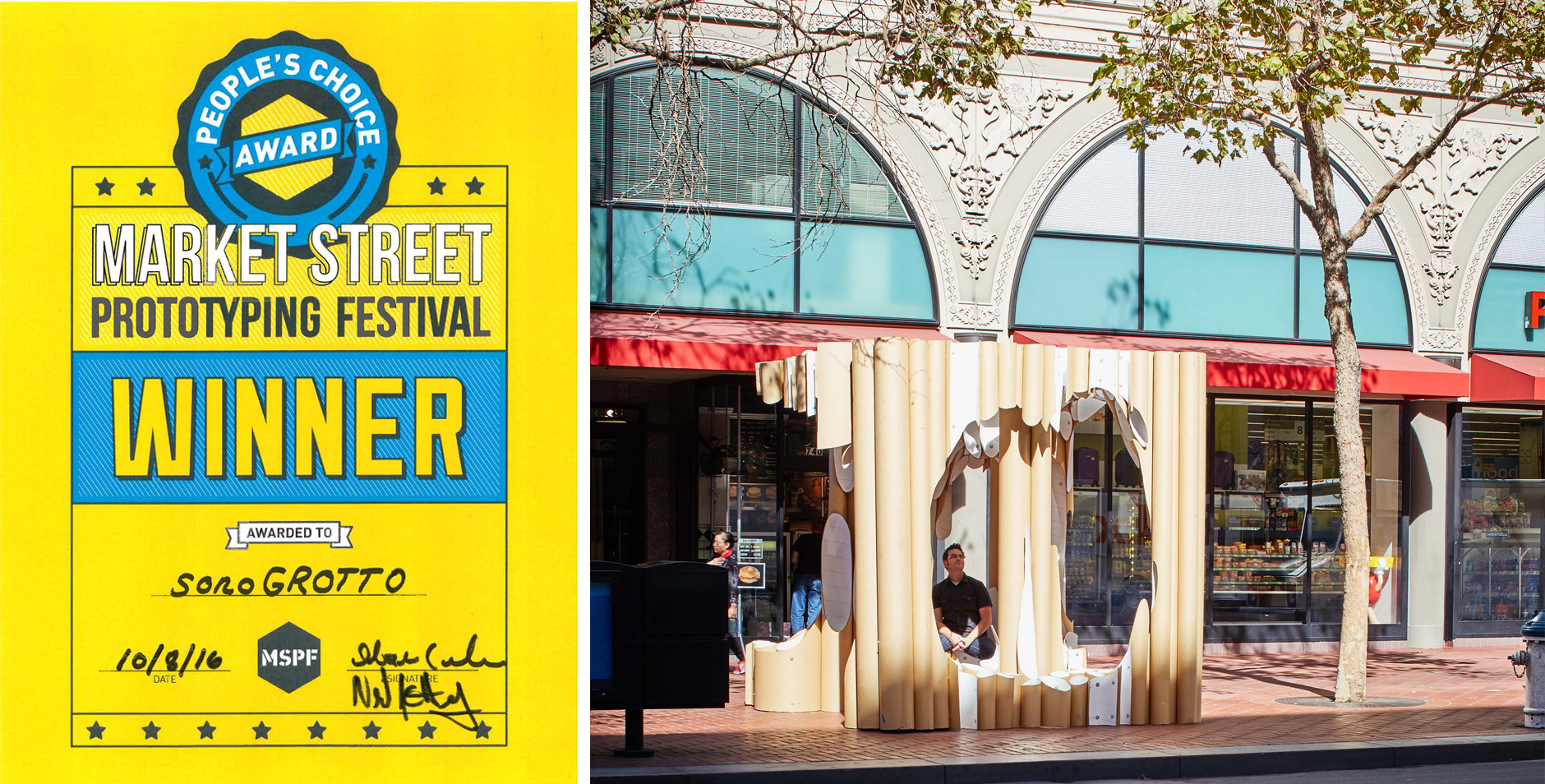 “You could see SonoGROTTO existing on Market Street or inside a restaurant or a lounge space inside a tech office,” Wood says. “There is something very appealing about defining a semiprivate realm within more expansive spaces.  People want something more than a cell of space or a banquette; they enjoy thematic micro-environments.” Just as the process of creating SonoGROTTO brought Kuth Ranieri closer together, the pavilion itself holds the potential to keep fostering interaction and sparking intimate conversations in a larger urban environment or busy active workplace. 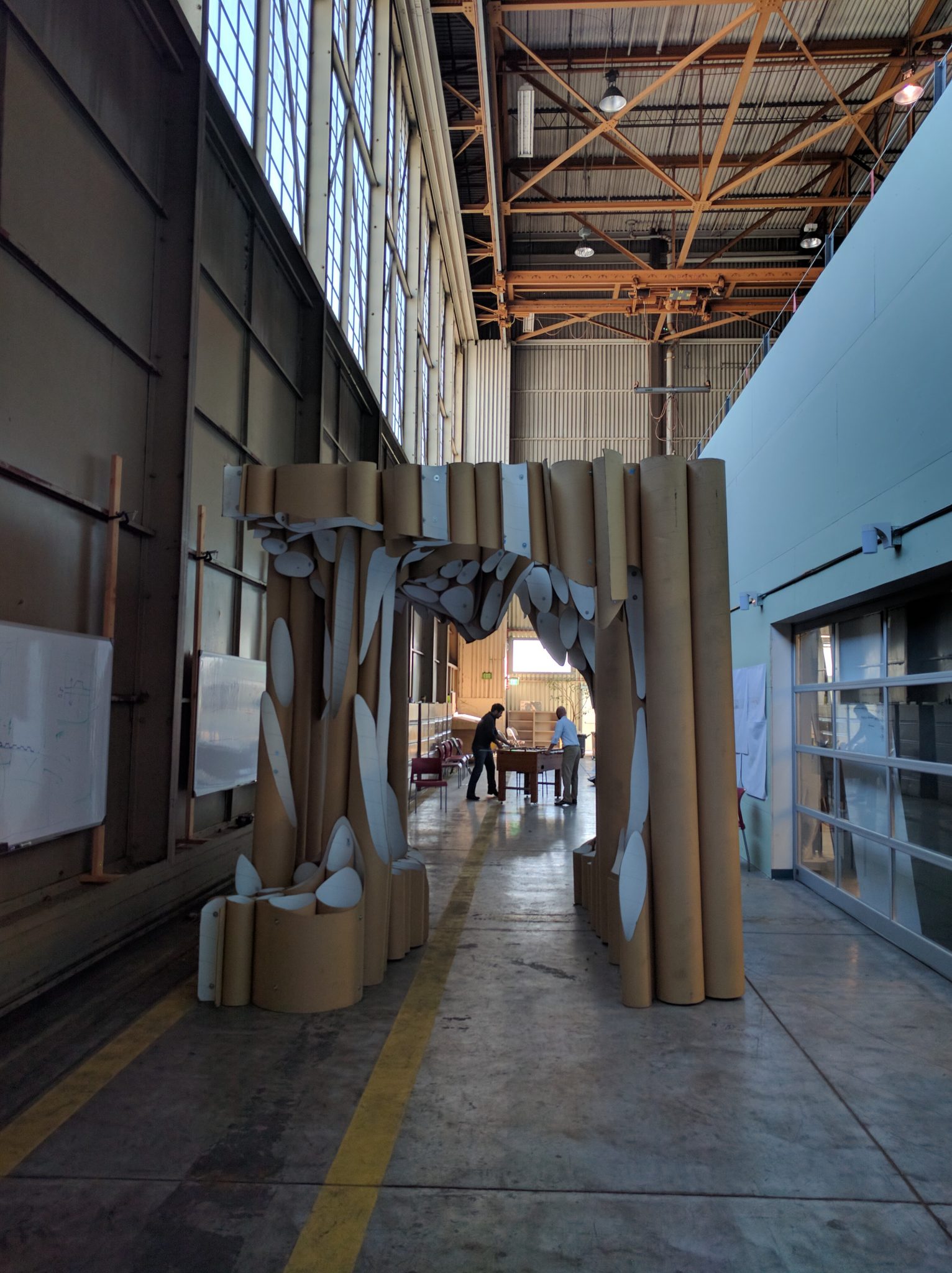