by Liz Ranieri and Byron Kuth

In the Bay Area, a number of clients have been asking us to revamp modest midcentury suburban ranch houses. Built by developers, they often have good bones, but need adapting and customizing for contemporary use.

A case in point is a remodel we recently completed in Marin. Our client was someone we had worked with years ago, when she asked us to adapt a midcentury home. When her kids were grown, she bought another midcentury house and came back to us to assist her with the next chapter.

The project started off simply as a kitchen/living room/dining room remodel. The house had good midcentury bones, a wonderful vaulted ceiling, and a substantial hearth. 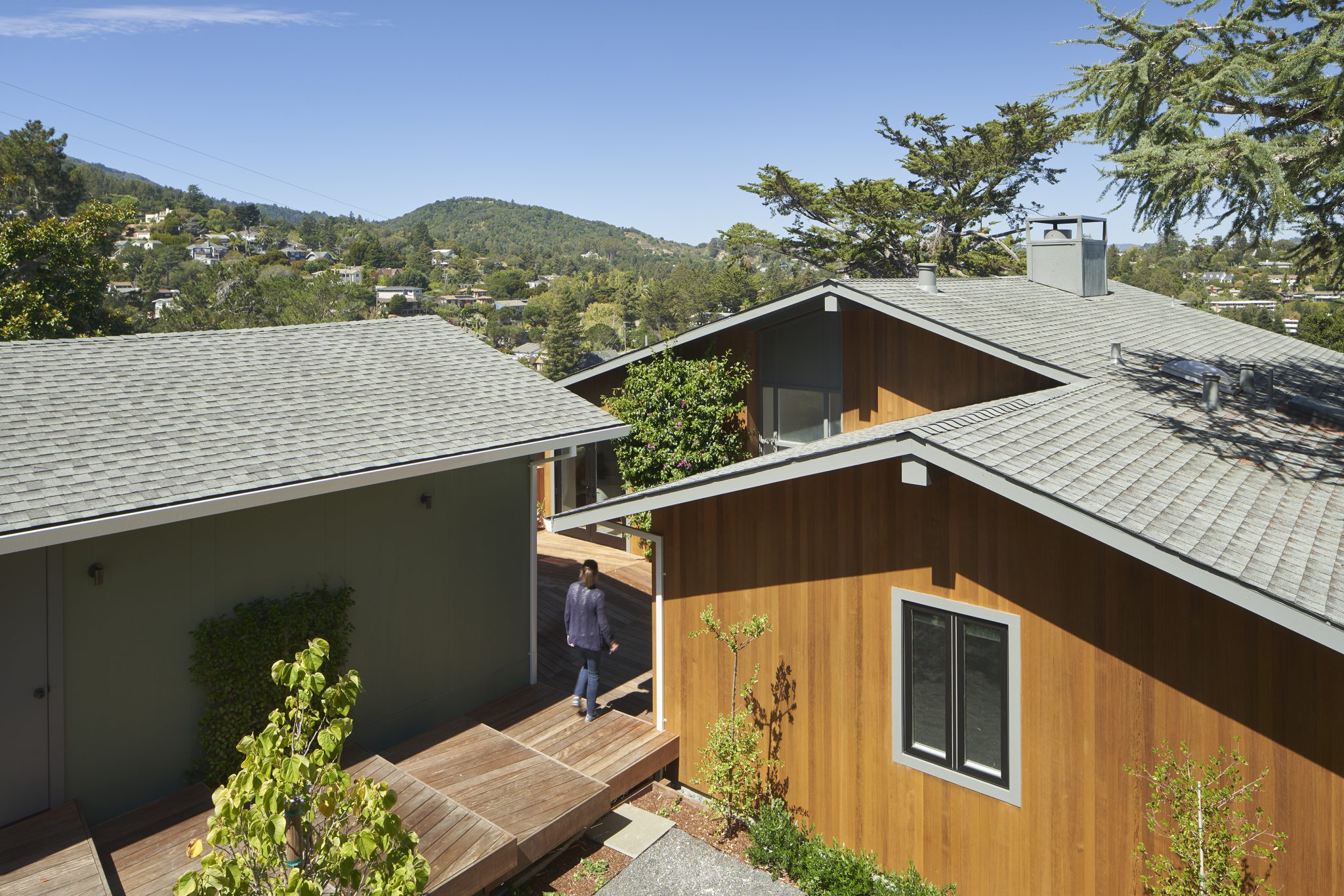 The house is located at the ridgeline of a steep hillside: you enter at the top level and descend into the house, ultimately winding up at the back looking out over a canopy of the trees to Mount Tamalpais in the distance. The interiors had been chopped up into small rooms, so you couldn’t immediately see through the spaces to the lovely distant vistas.

We started by asking our client the usual questions—how she used the space, where she liked to eat, where she drank her morning coffee, how she entertained, etc. We do this because we want our clients to spend their dollars where they will have the most visible, tangible, and meaningful impact.

Of course, she was just beginning to reinvent her life as someone living alone, so she didn’t have all the answers yet. She did know that she wanted her new house to be a home base for her three kids when they came back from college for holidays. But she also wanted it to be comfortable and intimate for herself the rest of the time. After a long day of work in San Francisco, she needed a place of refuge.

In line with that goal, she sought to improve the privacy of the home as well as the sense of security. Because of the steep downward slope, the house was exposed to the street. There’s a 12-foot drop as you walk down to the courtyard-level front entrance. So we came up with the idea of creating layers that unfold as you descend. Each layer would provide an opportunity to shed the stress of the day as you approached the heart of the house.

At the road level, we added a new vehicular gate made of vertical cedar slats and a new pedestrian gate of painted steel fins. The slats and fins are oriented so that the gates appear solid to passersby from most view angles. From the inside of the gates, however, you can easily see who’s on the other side. 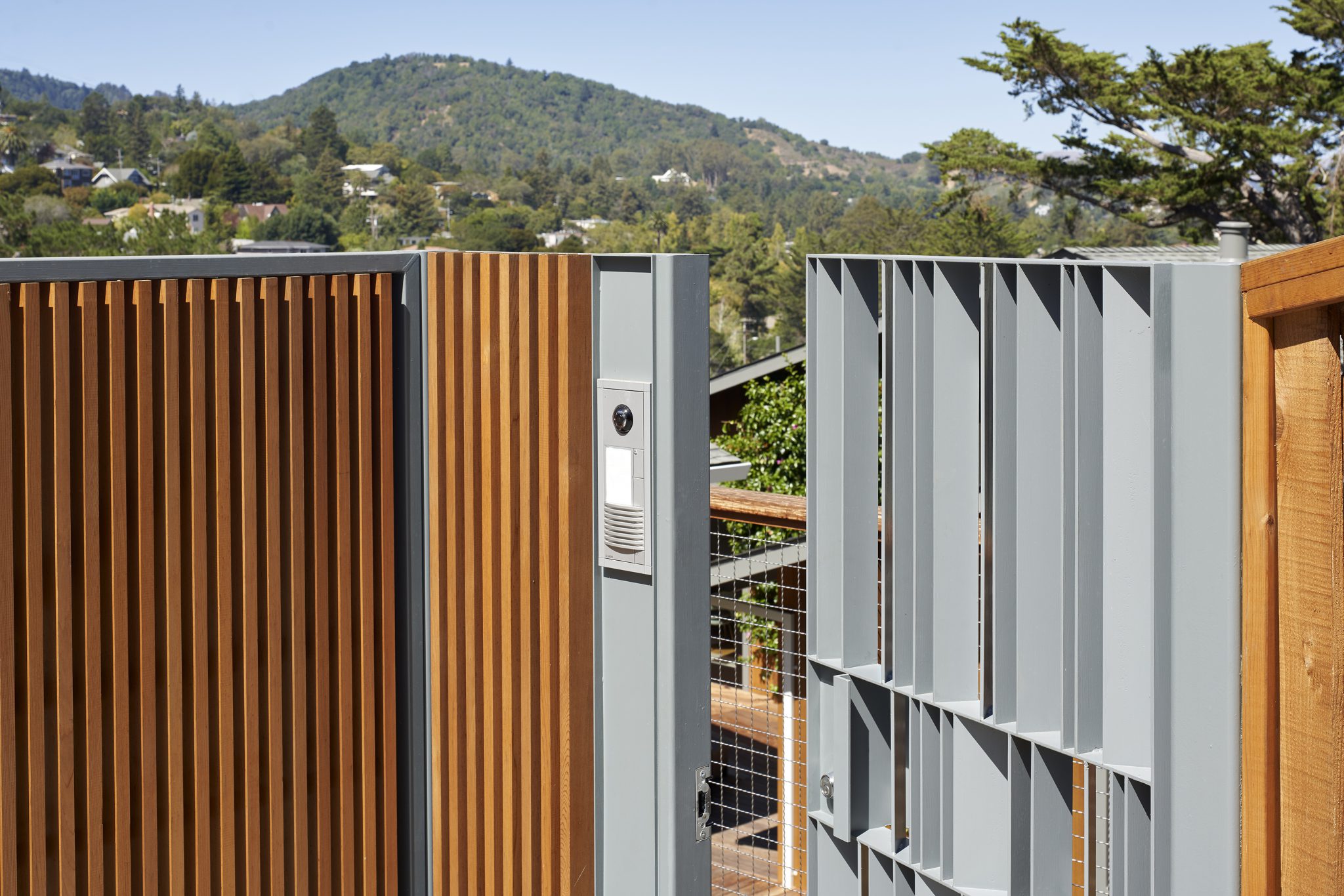 The original forecourt was an undefined residual space with a concrete slab between the house and garage. We transformed the space into a courtyard by redefining its materiality and edges: we expanded the space, adding an ipe wood deck, a privacy fence, and a bench element that frame the distant views. We also added a second entrance at the courtyard. 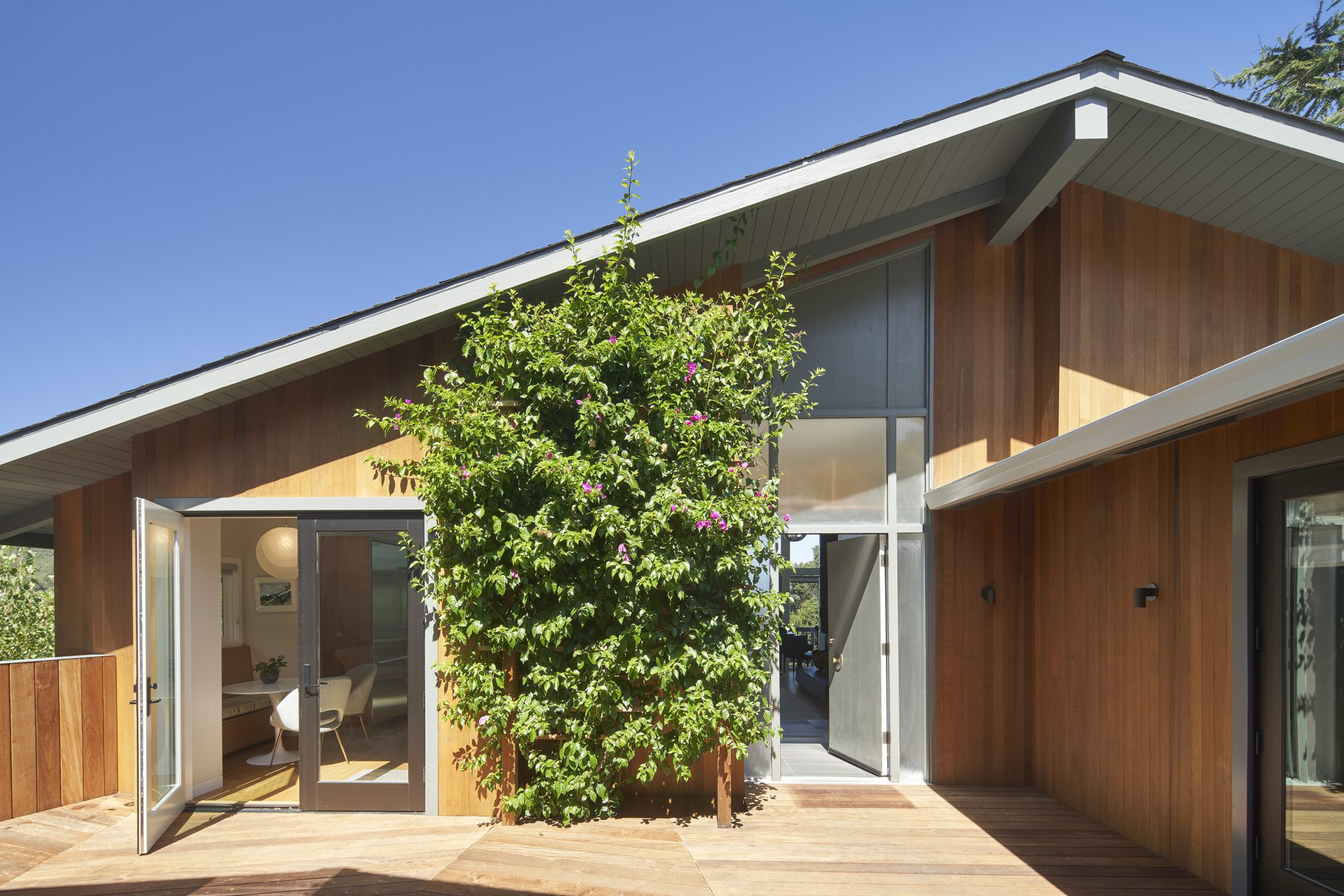 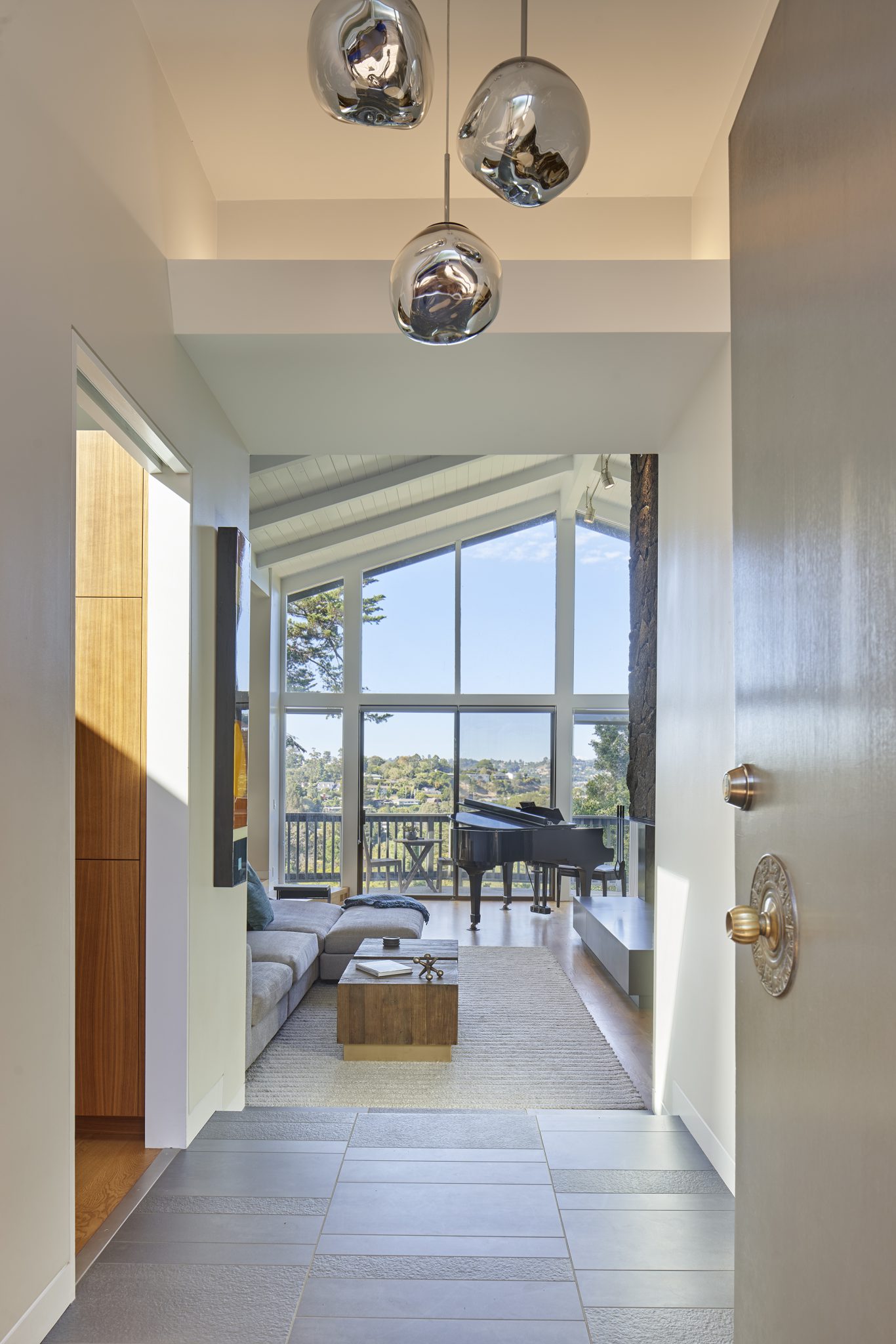 When guests arrive, they come to the original front door, stepping into the entry foyer as before, with views to the living room straight ahead. A new, more informal entrance off the deck leads through the breakfast nook to the kitchen and the dining room beyond. So there are two circulation routes, one more formal, the other more casual for family members. You can grab a banana from the fruit bowl on your way in. 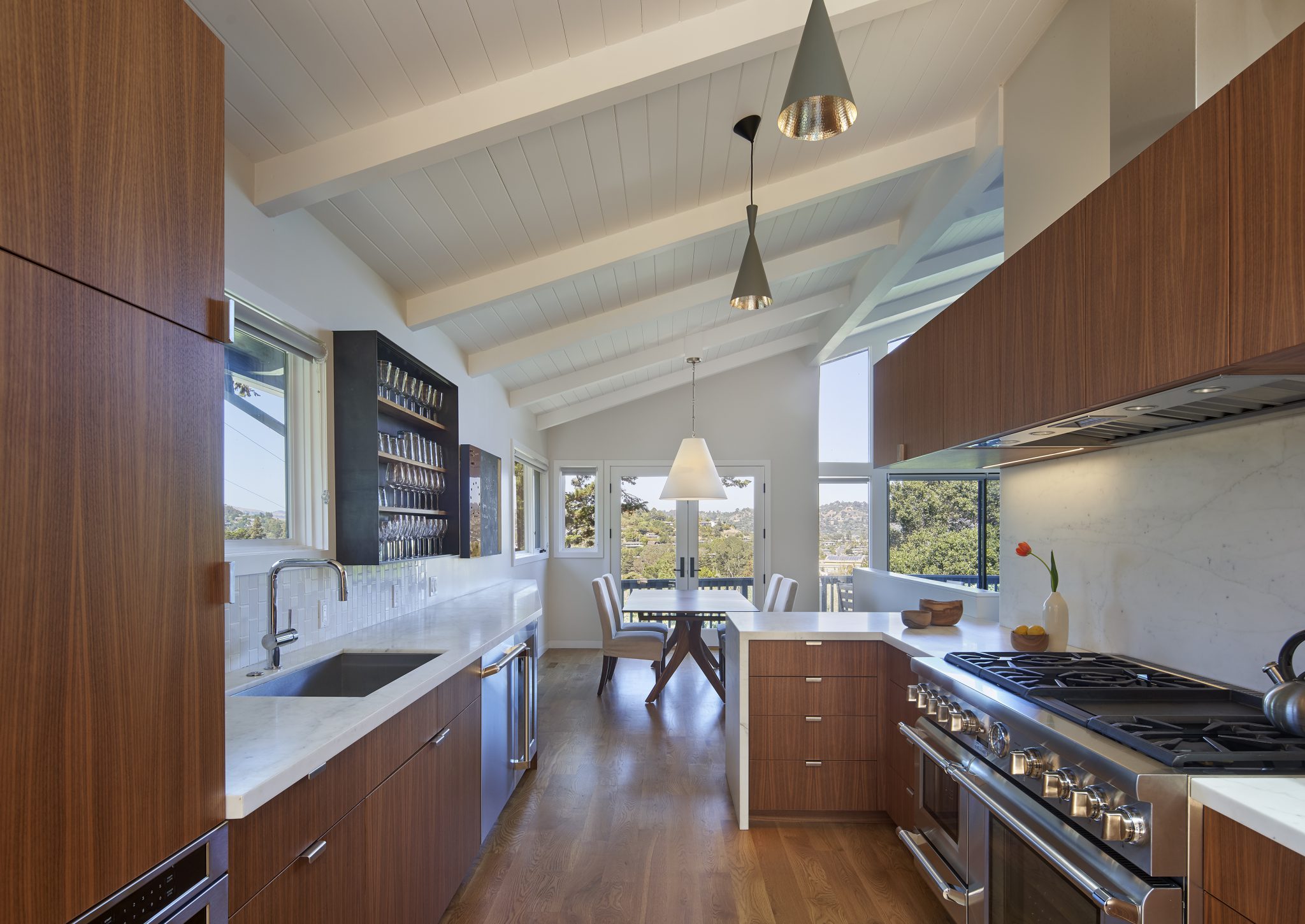 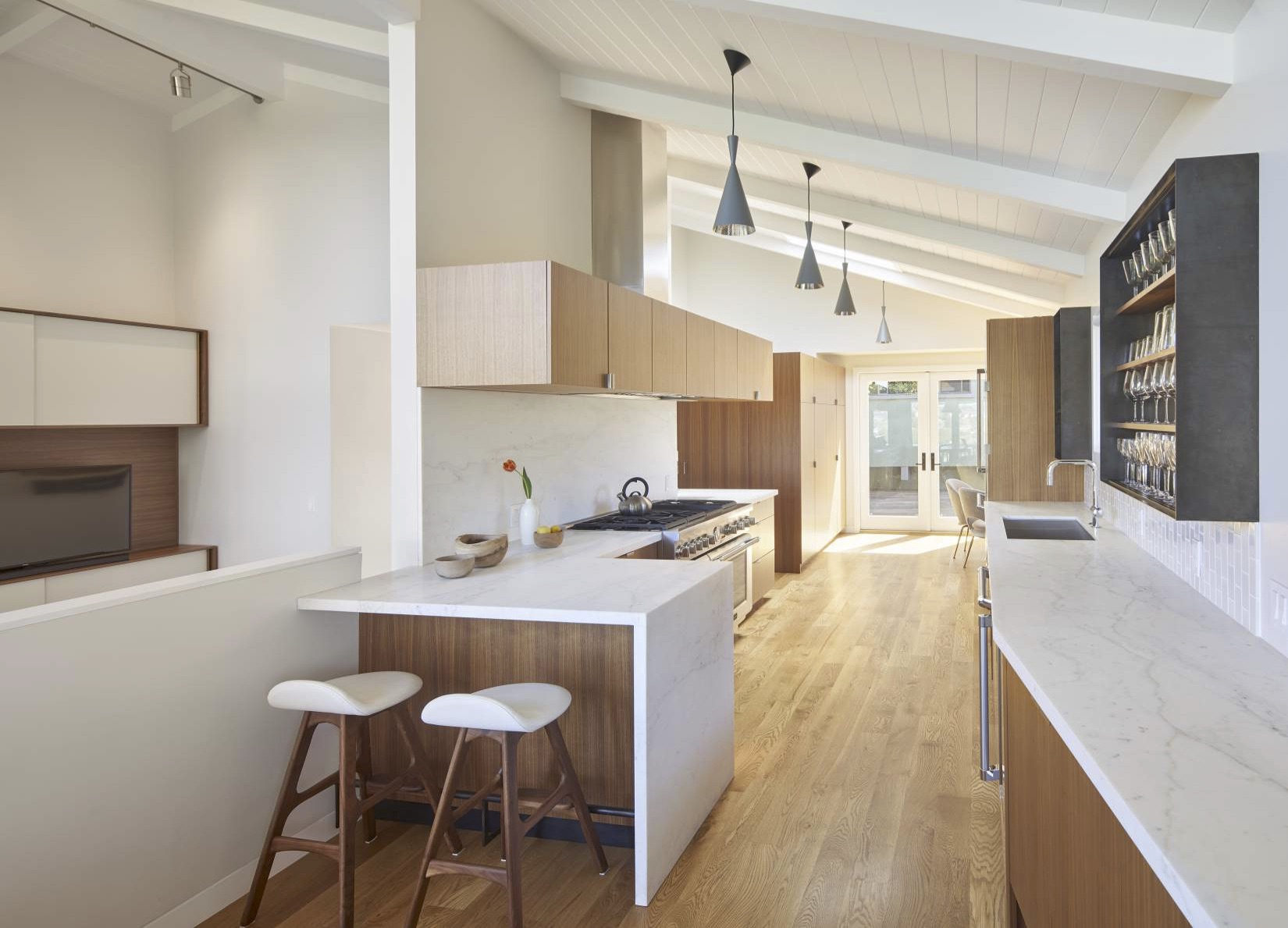 It would be remiss to talk about this house without mentioning one of its distinctive architectural elements, a lava rock fireplace. 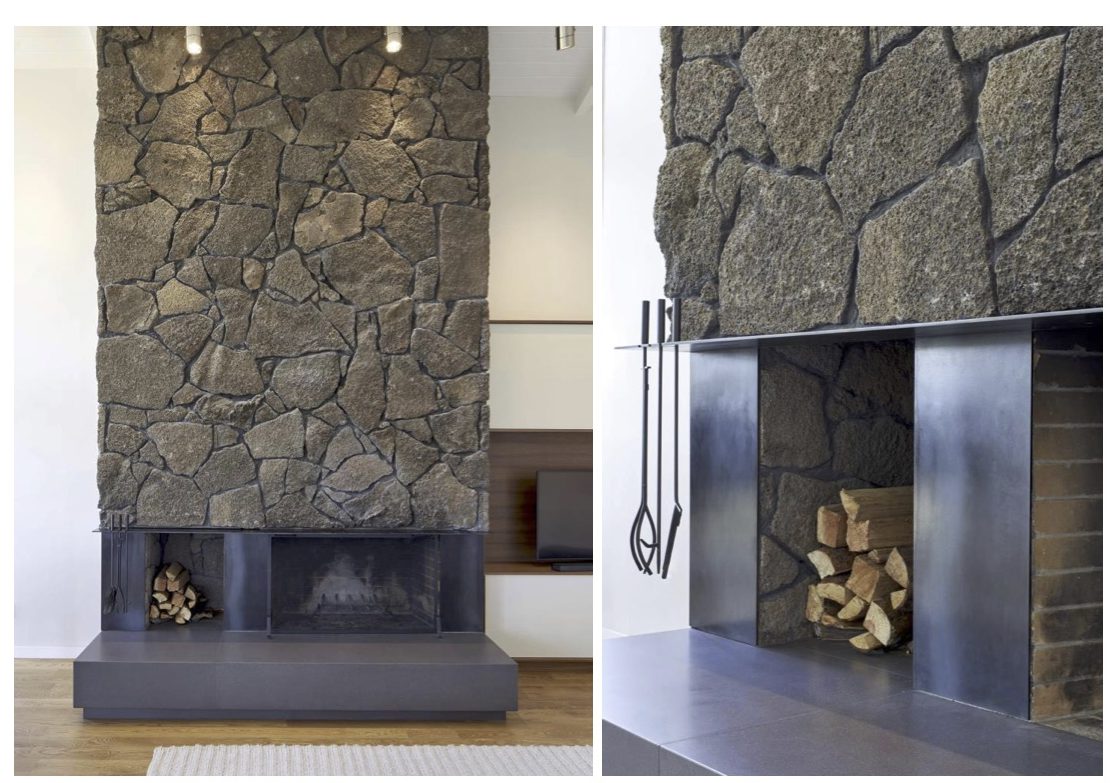 All of us felt that it had a powerful character, and even though it was rough, we felt it was an important part of the architecture, and we didn’t want to lose its power. Because the hearth was made of lava rock as well, nobody ever wanted to sit there—it was like sitting on a Brillo Pad. So we replaced the hearth with a precast concrete slab, smooth and welcoming to sit on comfortably. Then we framed the fireplace with a blackened steel edge plate, preserving the lava rock above. Our goal was to keep the bones and the texture of the original element, while creating a contrast to the clean, smooth lines of the rest of the house.

As the project progressed, our client said, “Well, since I’m doing this, maybe we should look at the master bedroom, too.” The master suite had a dark bathroom with 1970s tile, an undersized sink, and an added closet that compromised the space of the room. We pared back walls judiciously, installing sliding doors that can divide the bedroom and bath area as necessary, and tucked the closet space behind the bed’s headboard. 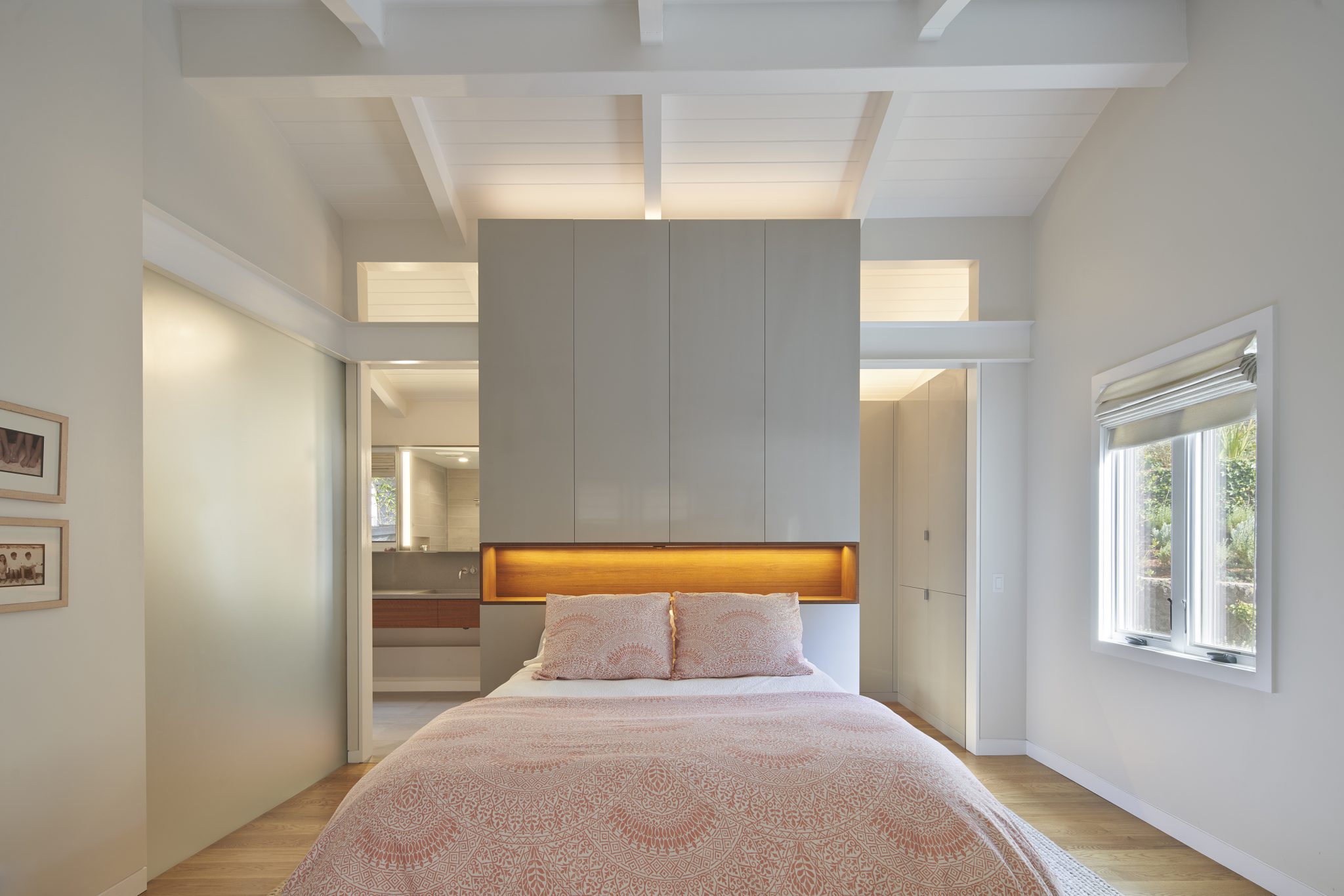 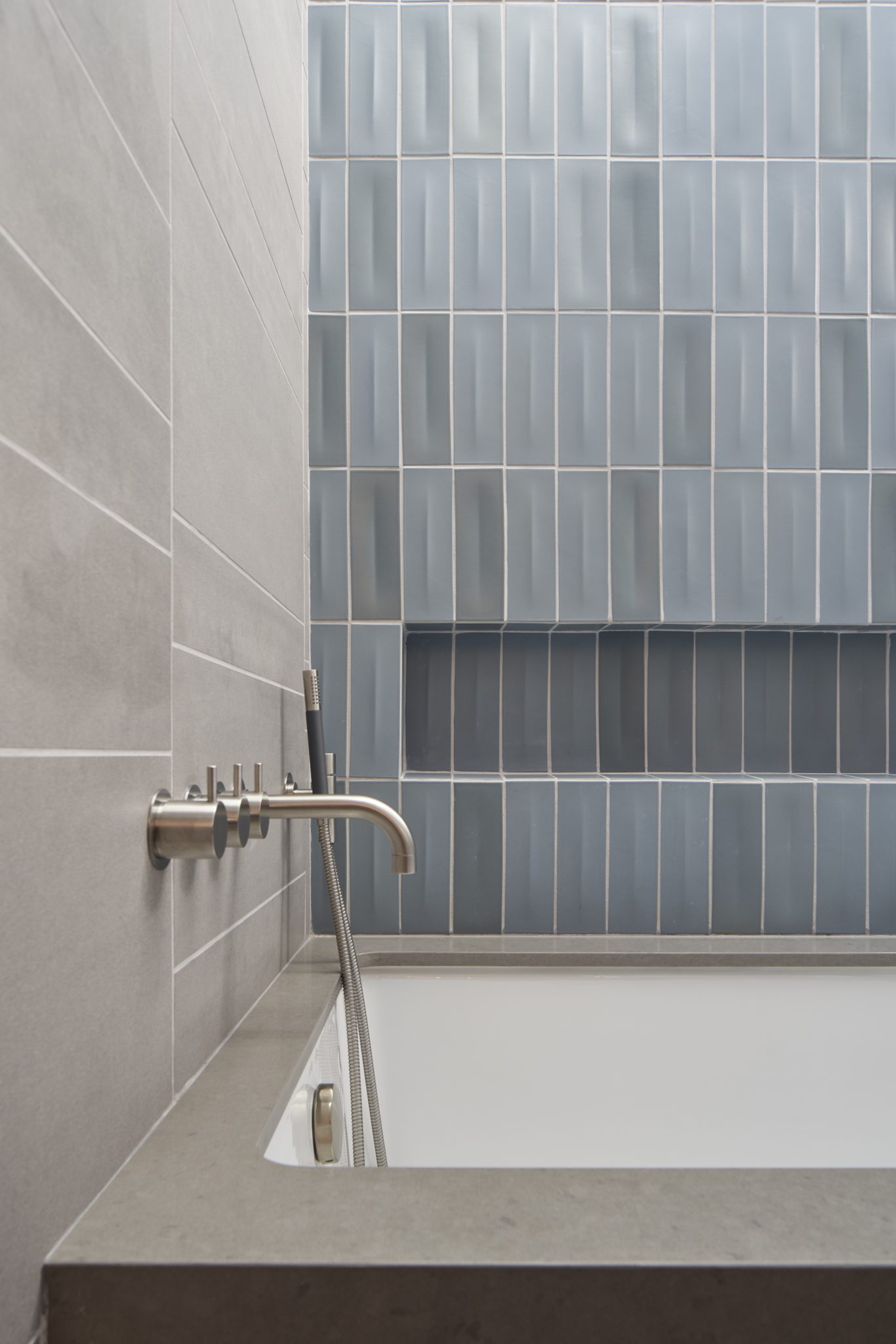 Now the whole house has a much better flow. It feels open where it was once chopped into discrete spaces. Rather than change its character entirely, we tried to enhance and expand on what was there. It still exudes the feeling of the original architecture, but now its spaces are better connected to each other, the outdoors, and distant views. Most importantly, it has been customized for the needs of its new owner.