After more than half a century of use, many midcentury modern buildings have undergone a lot of wear and tear. They may no longer meet current seismic codes or community needs. With the great treasures of midcentury modernism, our impulse is to preserve these structures; however, the decision of whether to restore, reconfigure or tear down and replace, must be made on a case-by-case basis. Not every piece of midcentury modernism is notable enough to be saved. Just because it’s modern doesn’t mean it’s good—or bad.

We have had the privilege of working on a number of mid-century homes and civic buildings, including great works by William Wurster, Paffard Keatinge-Clay and William Merchant; however, when midcentury moderns don’t relate to their site, or the site has changed, or they no longer connect to the city or its culture, the best option may be to tear them down and start again. The North Beach Branch Library in San Francisco was an example of a nondescript modern facility that didn’t lend itself well to adaptation. Built in the late 1950s, it was a multi-tiered building with areas that were inaccessible to the disabled and was too small to serve the current community. Furthermore, it turned its back on the nearby park, offering only a blank façade. The new, recently completed branch by our colleagues at LMS is much larger, fully accessible, and full of light. 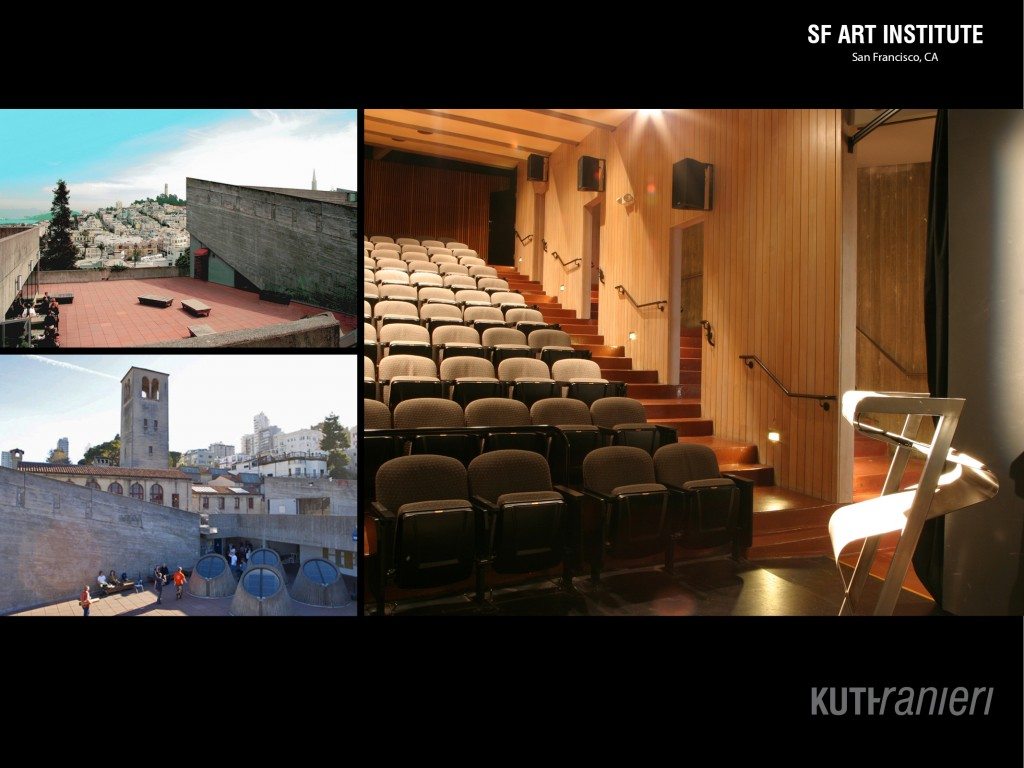 Two current projects of ours in San Francisco illustrate cases where saving the building makes sense: the Randall Museum in Corona Heights, which we’re renovating in a joint venture with Pfau Long Architecture, and Balboa Park Pool, adjacent to City College of San Francisco, which we’re renovating with ELS Architecture and Urban Design. These buildings were constructed in the 1950s when the city’s urban fabric was already well established. There was a consistency and recognizable order to the city’s buildings, plazas, and parks. In both cases, the Randall Museum and the Balboa Pool were consciously designed to stand out, to contrast with the regional character and architectural vocabulary. We are simply aiming to modify these buildings for contemporary use while maintaining their role as special buildings with a distinct aesthetic that contribute in a bold way to the surrounding urban fabric.

We have always admired the democratic aspirations of midcentury public buildings and the Randall Museum and Balboa Park Pool demonstrate their intention to embrace the diversity of the people and neighborhoods they occupy. They reflect a post–World War II ideal of inclusion, made evident in how they were originally designed. Their monumental ramps are the core circulators and stand out as memorable design features that connect at the main entries — decades before the Americans with Disabilities Act (ADA) was signed into law. They don’t meet current ADA standards, but they did work, and celebrated inclusion. We are interested in how making these buildings more accessible and flexible for current generations, extends those original ambitions. 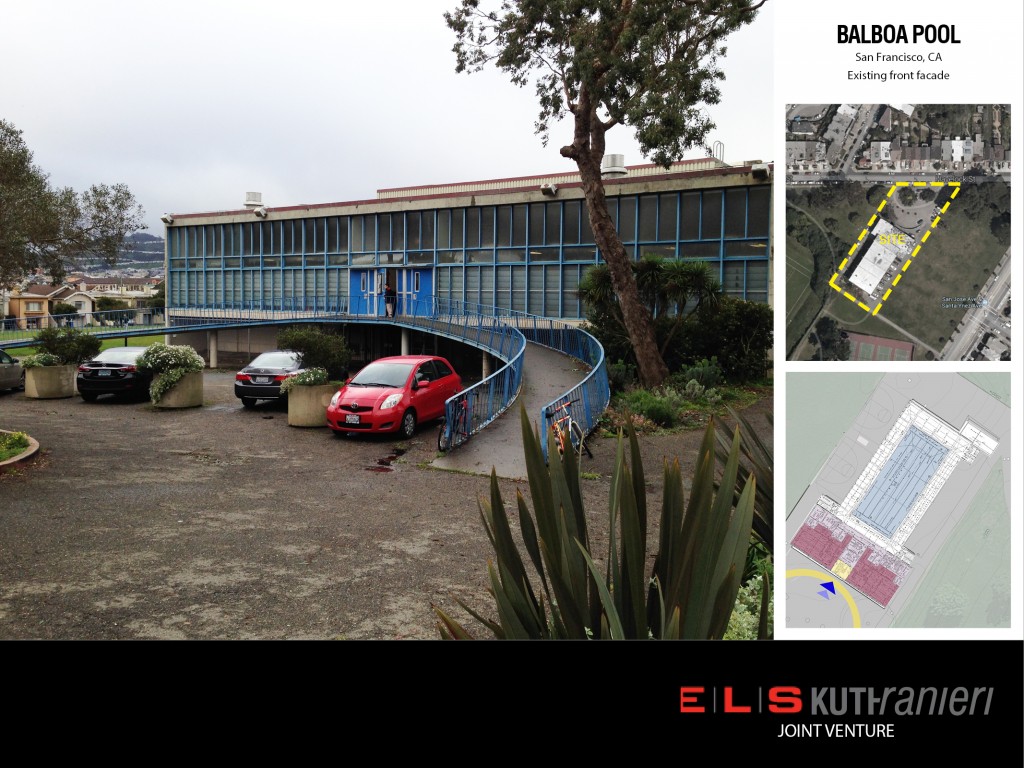 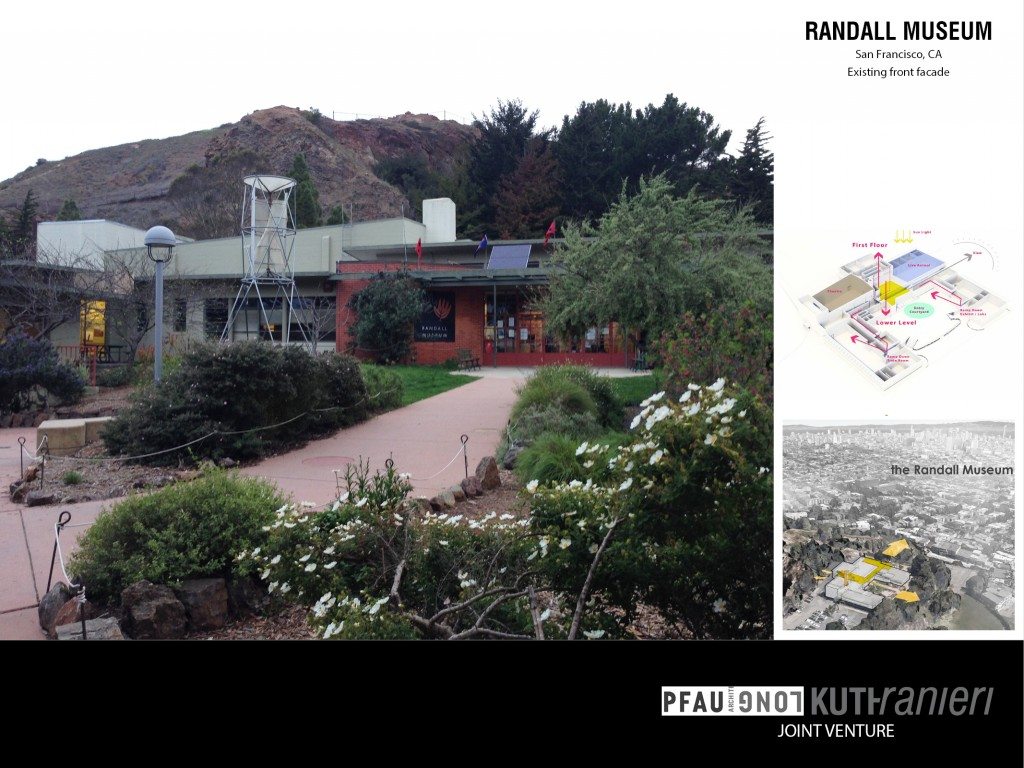 The Randall Museum’s 1951 building, designed by William Merchant, sits atop a large hill at the border between the Castro and Haight districts. This concrete workhorse has performed well over the decades. It just needs some improvements, both in the character of the interiors, but also how the public spaces flow and connect to the outside. The nature of education has changed in the 64 years since the facility opened, as has the

Interdisciplinary mindset of the students the museum serves. The building still reflects an idea about integrating arts and sciences from the 1950s, but with its numerous exhibits on the Bay Area’s natural world and a collection of over 100 live animals, updating the interpretive content to reflect the growing concern about ecology and urban habitats is key. An additional goal is to help the Friends of the Randall develop strategies to sensibly integrate how the use of technology can deepen learning beyond the experience of the exhibits. 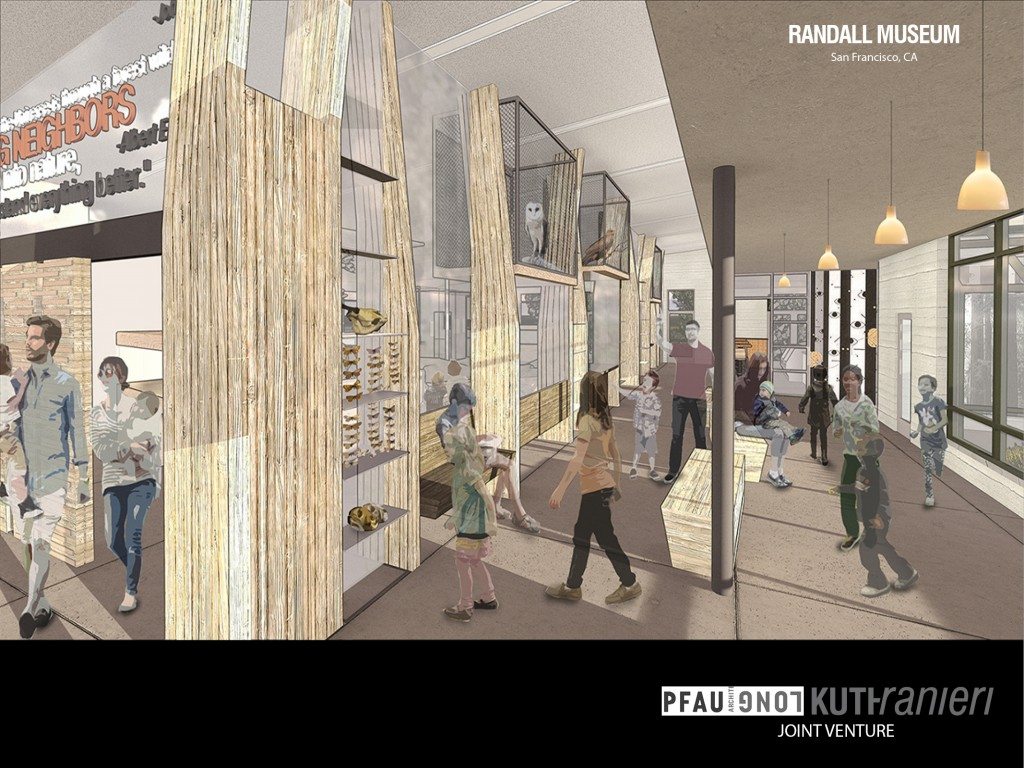 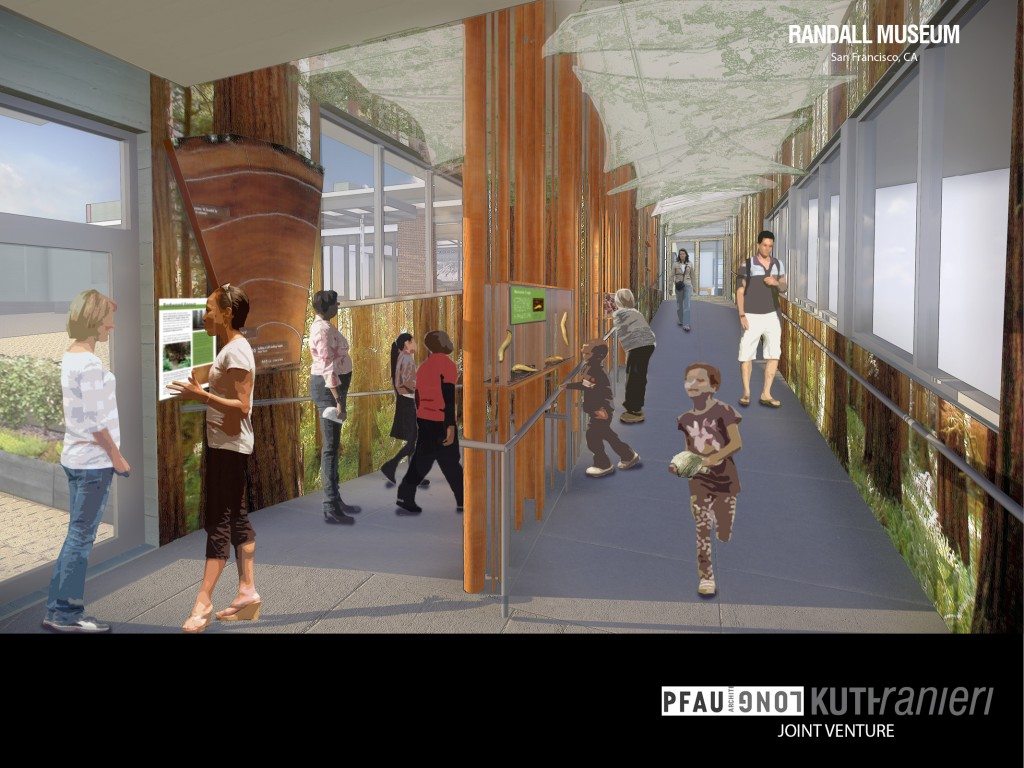 Balboa Park Pool, designed by Fredrick Reimers in the late 1950s, is also a poured in-place concrete building, with repeating angled buttresses and a vast, curved, semicircular entry. Regardless of the monumental gesture at the entry, it’s hard to identify the front door and doesn’t successfully relate to the surrounding park. We felt that every side of the building, and each façade, has a unique opportunity to better connect to its adjacent context. By minimally modifying the perimeter and reworking the floor plan, it opens the opportunity to provide amazing views between the pool and park. The addition of a new entry canopy and community room acts as a beacon to mark and reconnect this gem back to its neighborhood context and community.

We see these buildings analogous to rich texts, and our approach is to write in their margins, engaging the original narrative but adding something new that relates to the contemporary needs and aspirations. Building on the egalitarian culture of the midcentury is way to reflect its evolution and expansion in our society. For example, program needs have evolved over the last 50 years, changing rooms and restrooms are labeled not just as “Men’s” and “Women’s,” but “Men’s,” “Women’s,” and “Family,” reflecting the increased role that men have looking after children. Aside from the heroic structures and honest materials, as with the celebrated concrete frame at Balboa and exposed poured in place board-formed walls at Randall, the flow between spaces no longer supports how the buildings need to work or connect important public spaces and programs to the surrounding outdoor context. 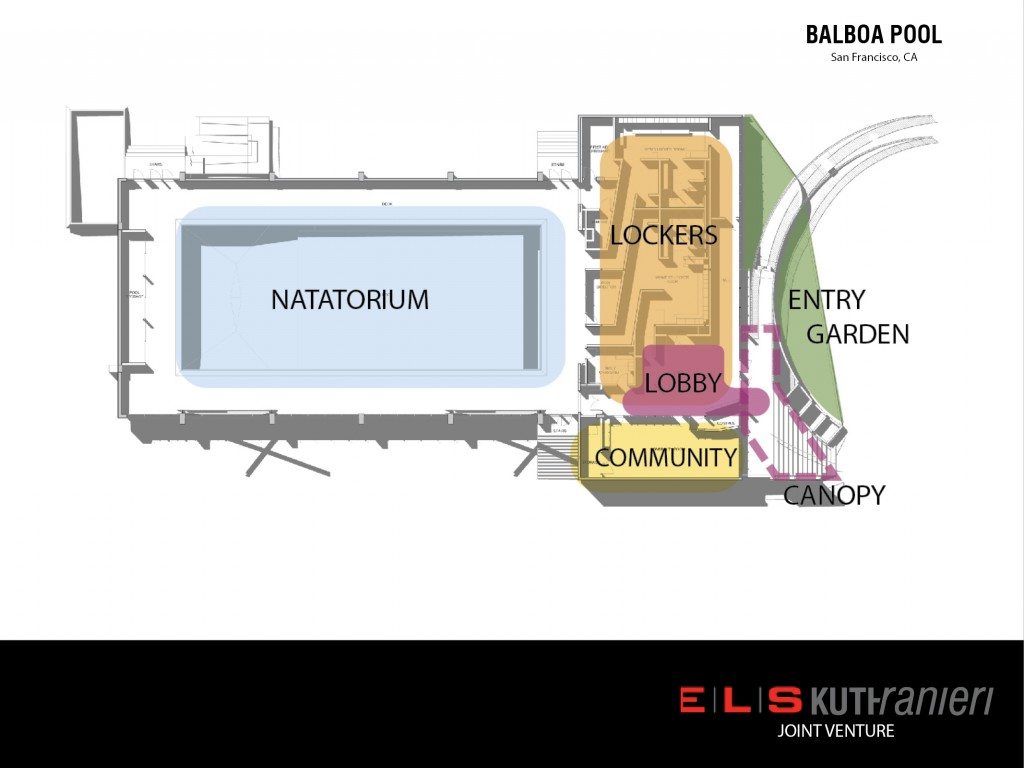 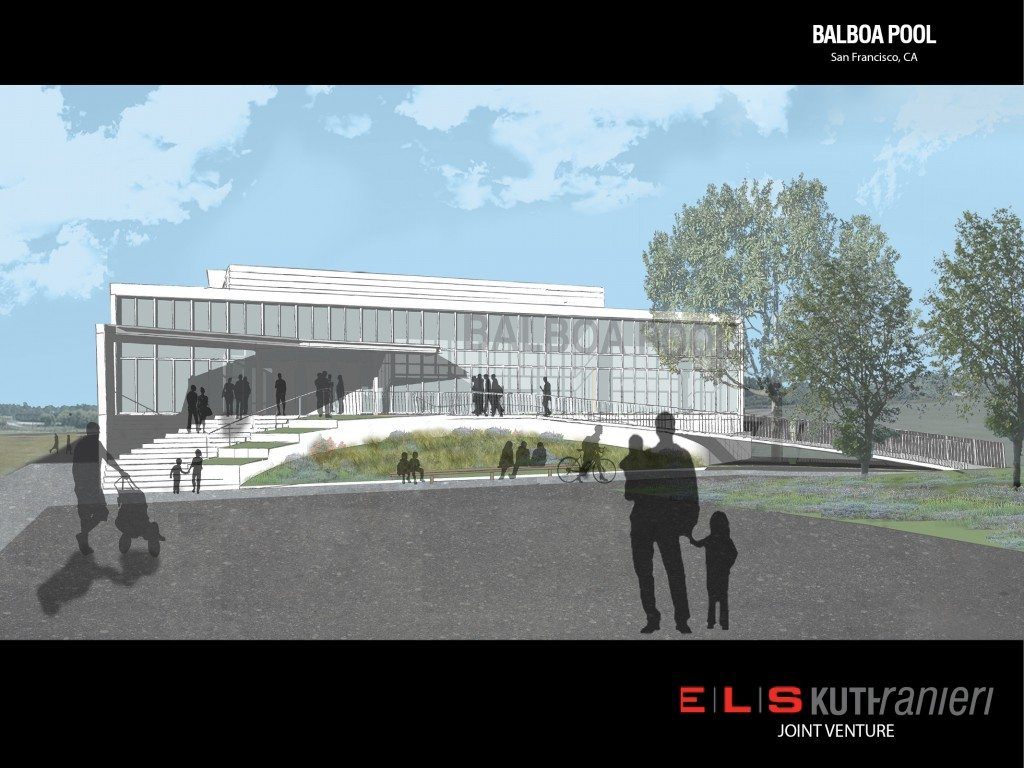 One reason we like reworking midcentury buildings is that they have “good bones.” We can use at least 90 percent of the original building as a framework and save the remaining 10 percent to make a provocative change, adding a layer that makes sense with the existing building but offers something sensual and remarkable to strengthen the connection between the space and the people who move through it.

This period of modernism emphasized the rational over the sensual. But a rational plan sometimes results in an unfulfilling connection to place, lacking moments for intimate experiences. These buildings tend to offer grand public spaces, with all materials having the same level of finishes and the same off-the-shelf components. It can be hard to find yourself in such a space. When we rework these buildings, we try to humanize the aesthetics and create highly specific crafted moments within the larger space, and offer an architecture that you want to touch. Sometimes it’s as simple as building the right kind of bench against an existing wall. 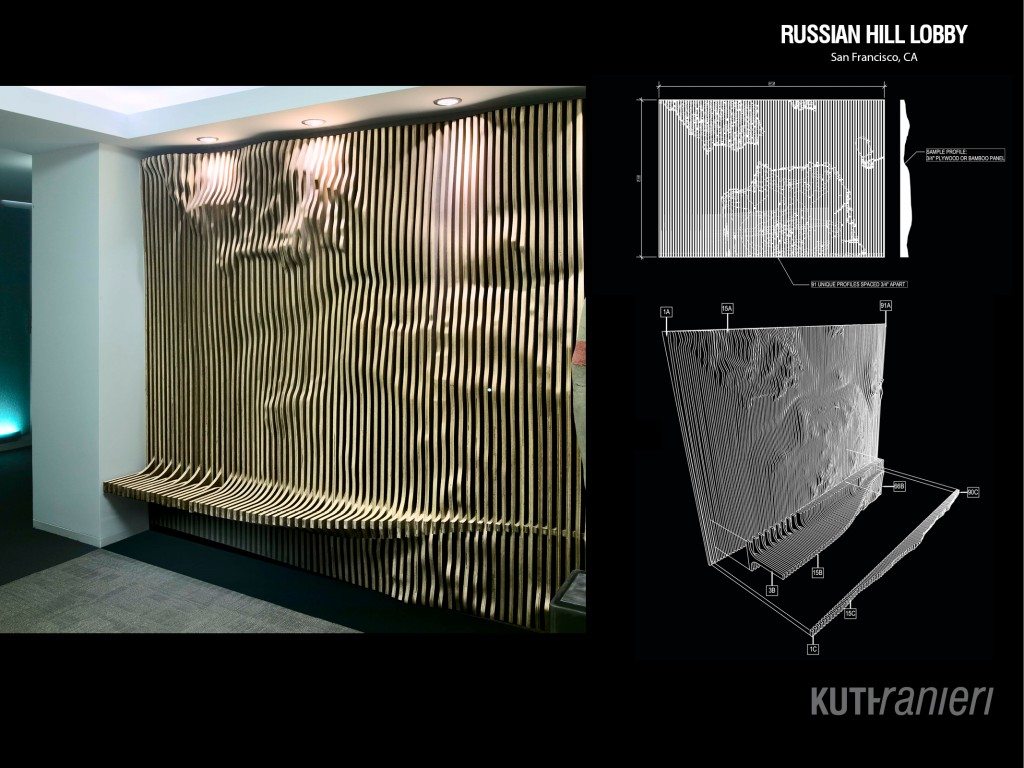 An additional challenge is to rethink these projects through the lens of sustainability. Governmental agencies –at their best—require that public institutions meet new requirements for energy efficiency and abide by a “green specification.” The upshot is that these projects can be toxic cleanups and the design/build teams must plan for additional costs for abatement. The good news is that we can create healthier spaces, an architectural transparency, intuitive way-finding and spaces full of fresh air and natural light.

As a designer, modernism doesn’t encumber you like a classical language might, or an Arts & Crafts or Victorian vocabulary. In some ways, the very neutrality and abstraction of modernism allows the renovating architect greater opportunity to create new, intimate moments. There is a tremendous amount of freedom to introduce new ideas that can extend the original concepts but also reconnect the frame to its users, a new community, culture, and time.

We probably hold two somewhat contradictory opinions about renovating midcenturies. Many examples can be viewed as works of art, markers of history, and it’s important to preserve them. But, as powerful as these buildings may be formally, the architecture is irrelevant unless it’s purposeful. Perhaps through thoughtful and strategic design interventions, we can recall the original intentions and offer a renewed expression for today’s changing needs and realities.