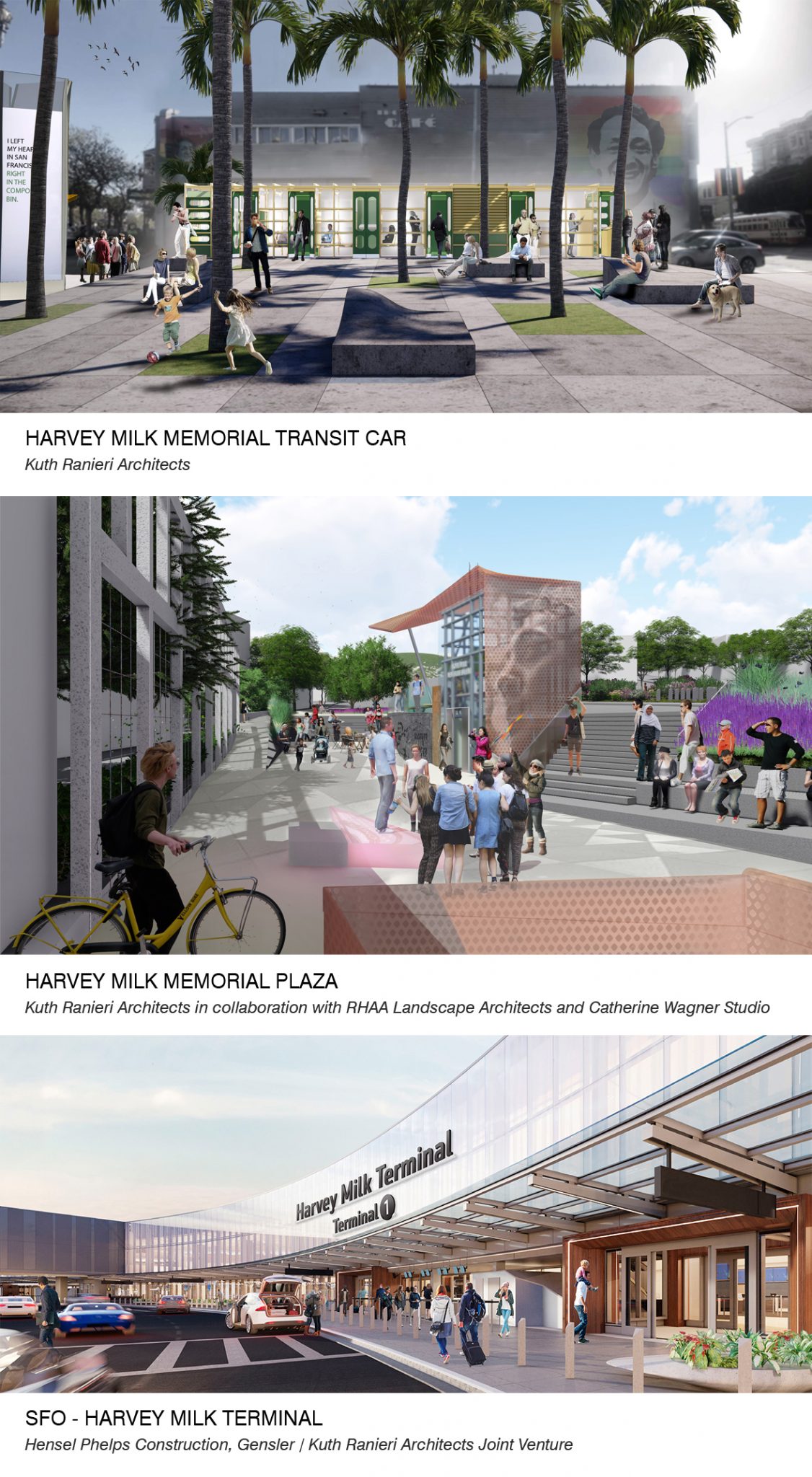 By Byron Kuth and Liz Ranieri

Since our firm’s inception, we have been involved in the design of three memorials to Harvey Milk. Milk, a civil rights and human rights activist, made history as California’s first openly gay elected official when he joined the San Francisco Board of Supervisors in the late 1970s. He was slain eleven months later, but his legacy lives on. All three of the memorials we created are part of urban infrastructure projects, which is no accident. Like infrastructure, Harvey Milk was all about connecting.

Born in 1930, Milk grew up in a middle-class Jewish family in New York. He started becoming involved in political activism in the 1960s, including protesting the Vietnam War. When he moved to San Francisco in 1972, he opened a camera store on Castro Street, a store that quickly became a community hub. He co-founded the nation’s first association of LGBT businesses and became a political spokesman for the gay community. After multiple unsuccessful runs for supervisor, he succeeded in 1977, fighting to protect gay rights, provide affordable housing, and improve neighborhood safety. He brought together diverse coalitions and spoke out locally and nationally against discrimination.

Our first Milk memorial was in 2000, when we entered a design competition for the San Francisco Prize to expand the Harvey Milk Plaza at Castro and Market Streets. This three-acre transit plaza outside the Castro Muni Metro subway station had been named after Milk in 1985, but the only recognition there was a plaque. The competition asked for ideas to redesign the nondescript area into something that would honor Milk’s legacy and the plaza’s crucial location in the Castro District more effectively. 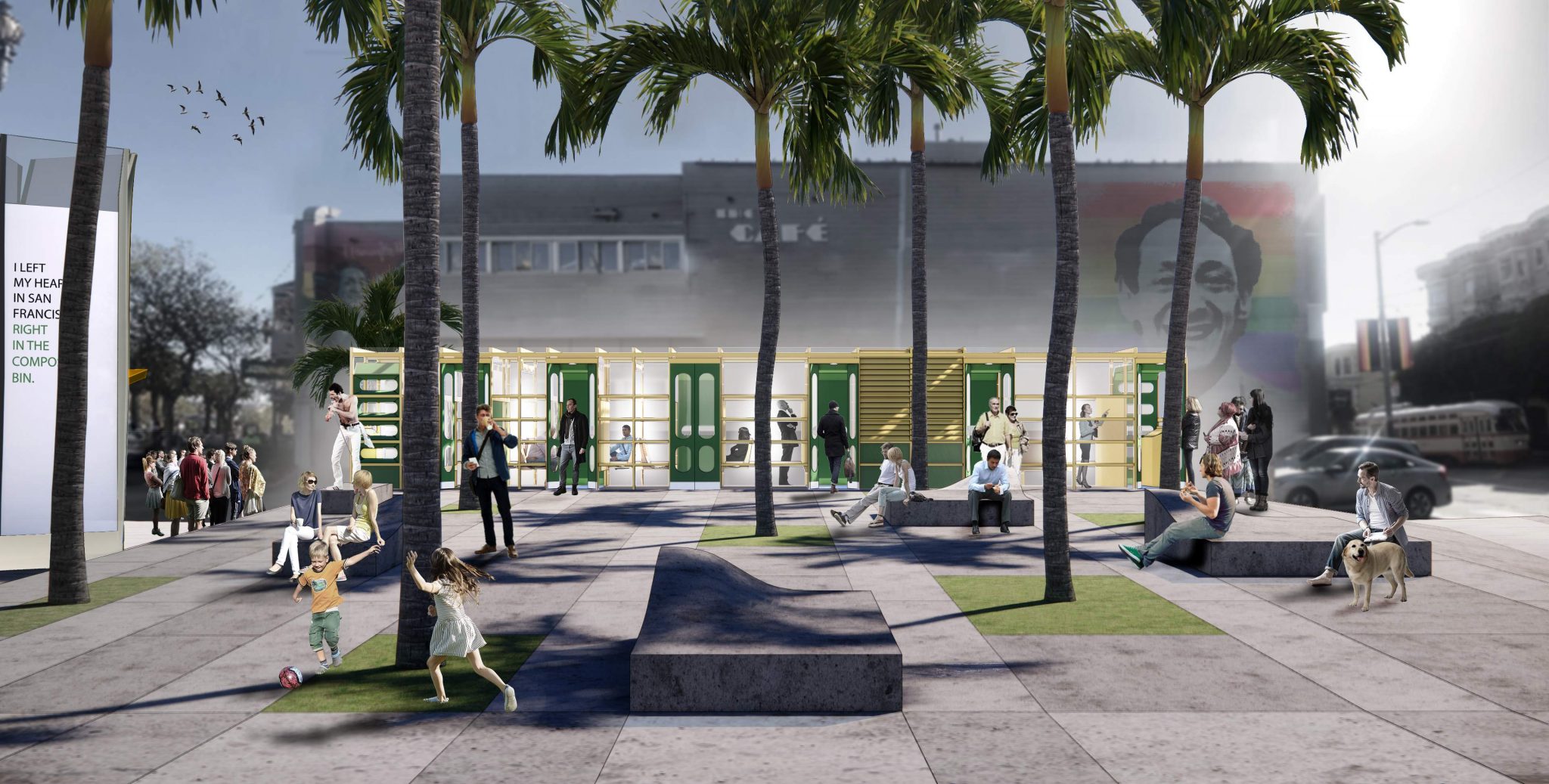 As we often do with design competitions, we expanded the prescribed competition boundaries in order to include the transit route that connects the Castro to City Hall: we would place a streetcar on the F Market & Wharves Line, extending the boundaries of civic space and connectivity. The streetcar would incorporate digital displays of local history and of Milk’s life and work as well as real-time video of interactions between visitors gathering in the car’s seating areas. 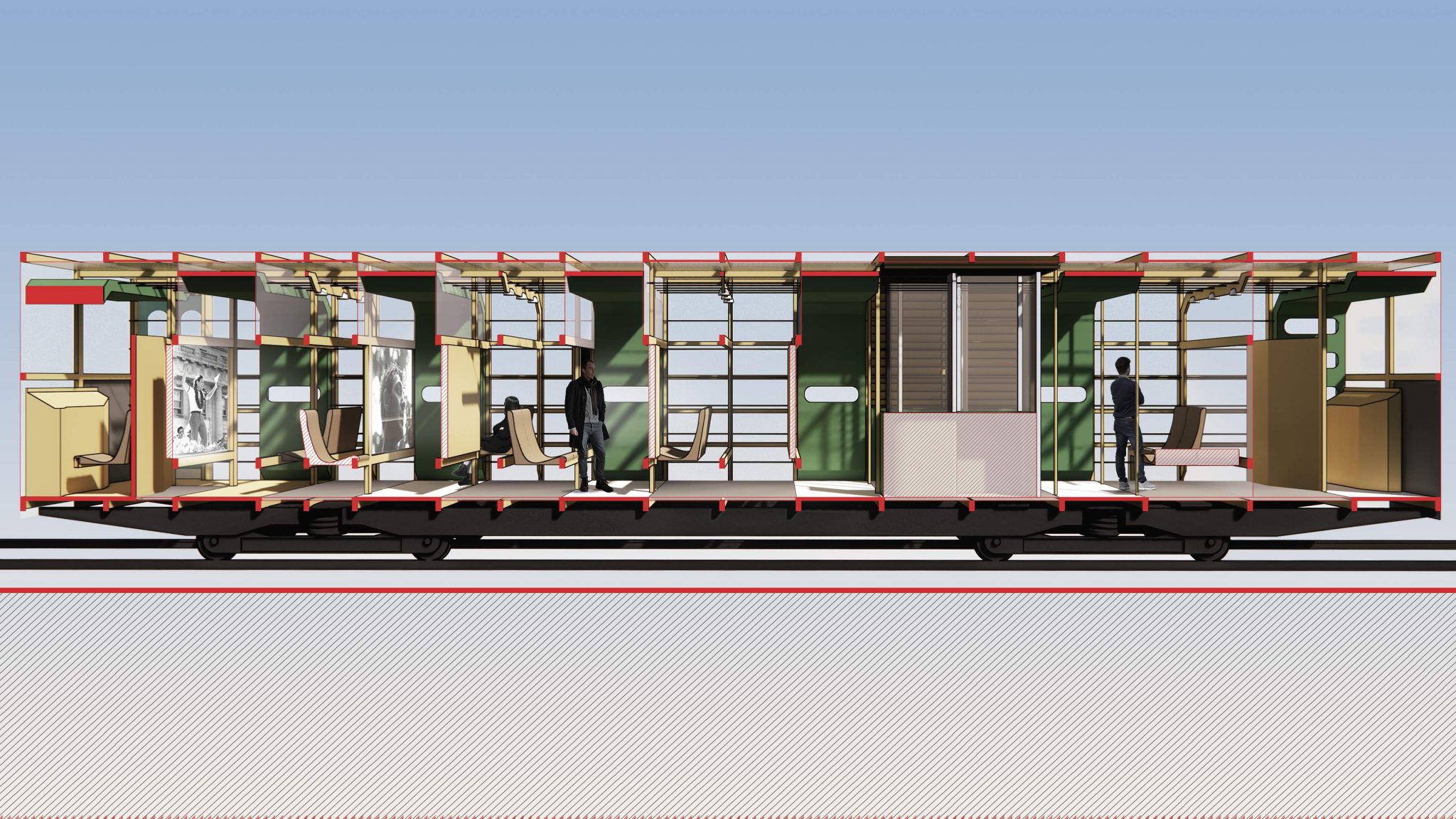 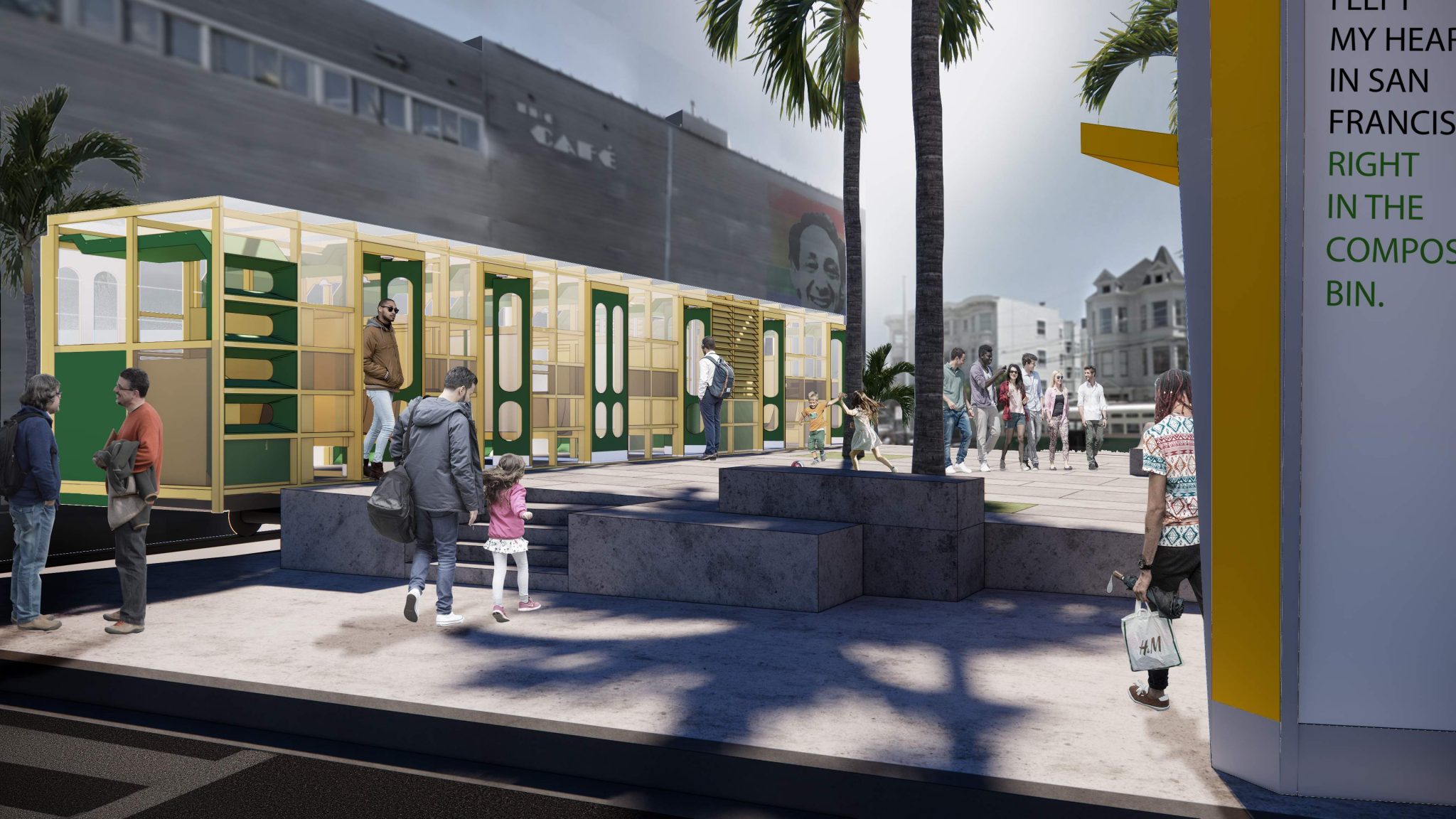 The idea came out of our interest in designing memorials that were integrated into the everyday experience of life, rather than an isolated, heroic monument to a moment or person of the past. As supervisor, Milk gave up the Volvo he had been leasing in order to ride public transit from the Castro District, where he lived, to his job at City Hall. We wanted to commemorate him not with a specific place, but in a more systemic way that connected to the larger urban environment, just as Milk, ever a populist, connected with people on the Metro and on the streets. 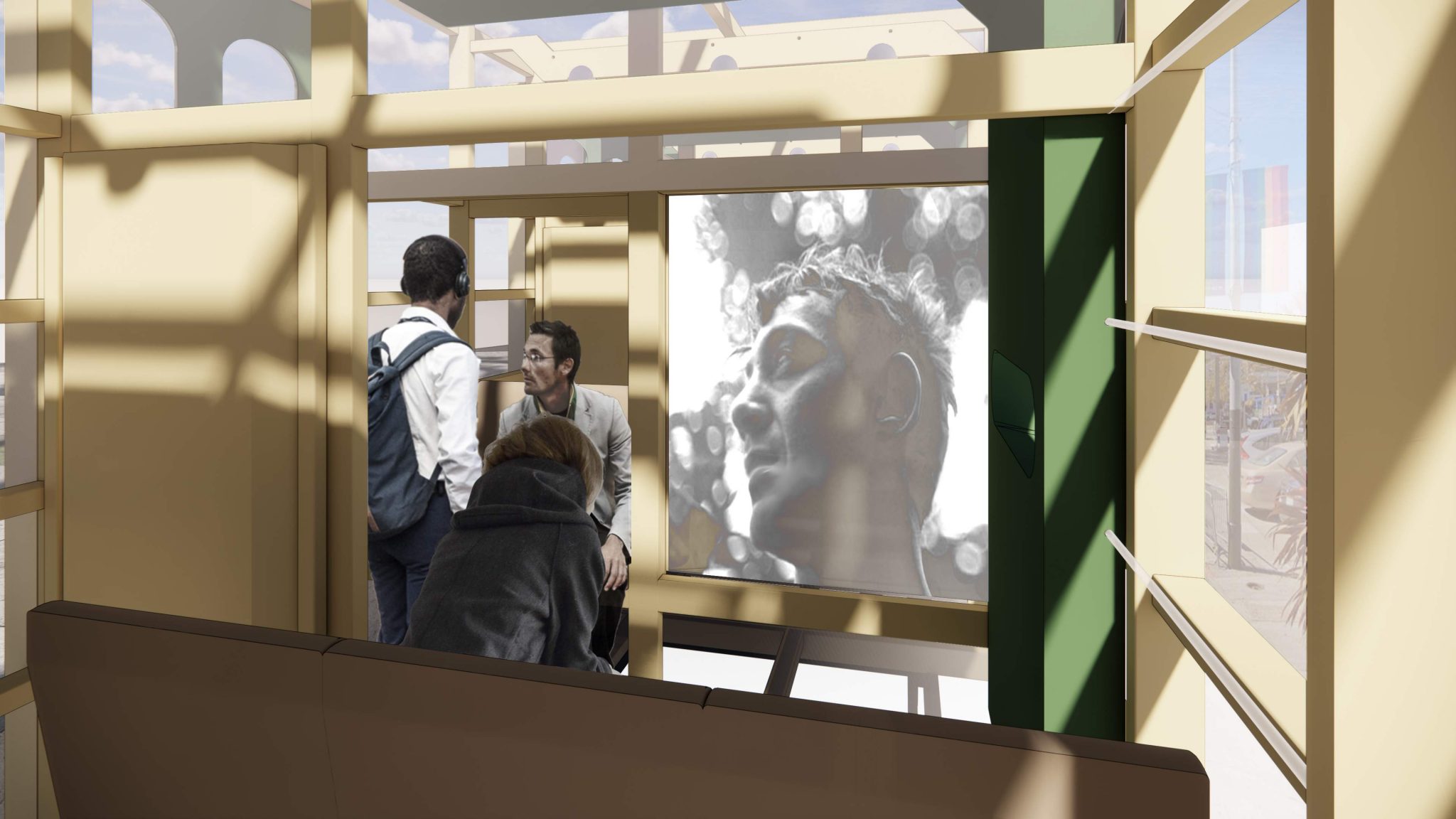 Another firm’s entry won the San Francisco Prize, but the project was never realized. Then, in 2017, the Friends of Harvey Milk Plaza—part of the Castro/Upper Market Community Benefits District—held another design competition for a memorial to Milk at the plaza. The competition was sparked by SFMTA’s plans to install a new elevator in the plaza to provide access to the underground Muni Metro station for those with disabilities. This time, we partnered with RHAA Landscape Architect and Catherine Wagner Studio. 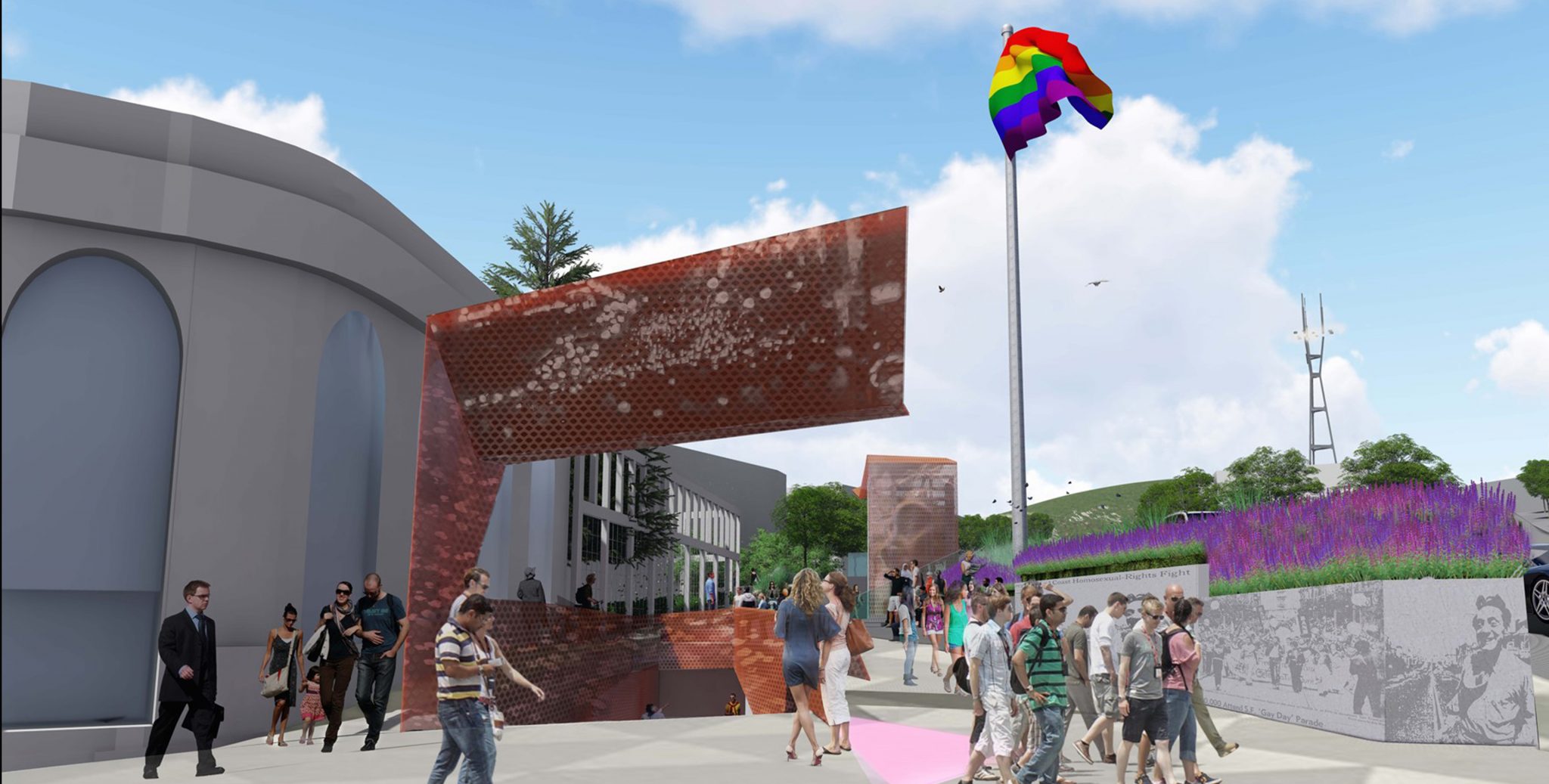 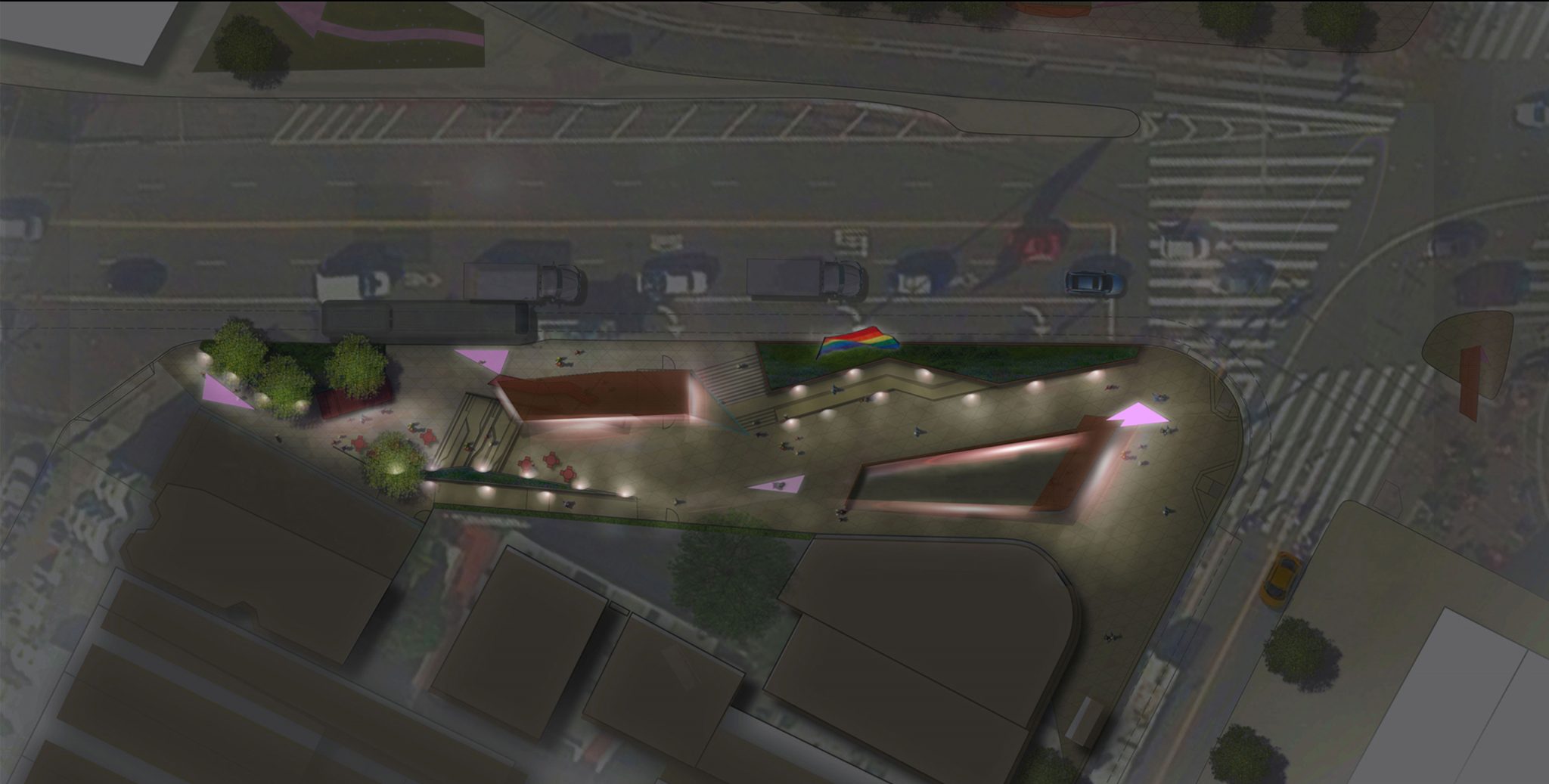 As we had in our first proposal, we chose to integrate the memorial into the access points for the Metro and share information about his life throughout the journey from street to station. We designed a memorial with layered experiences, so it would remain rich even for those passing through on a daily basis. We wanted to provide dynamic ways to learn about Milk, not static text on a wall or a series of still images. We proposed a street-level plaza with a panelized ribbon of fluid visual content, evoking the memory of Milk’s life and extending beyond the plaza’s edges to create a new gateway to the Castro. This time, we were named a finalist for the competition, and the winning entry is currently being refined in concert with city officials. 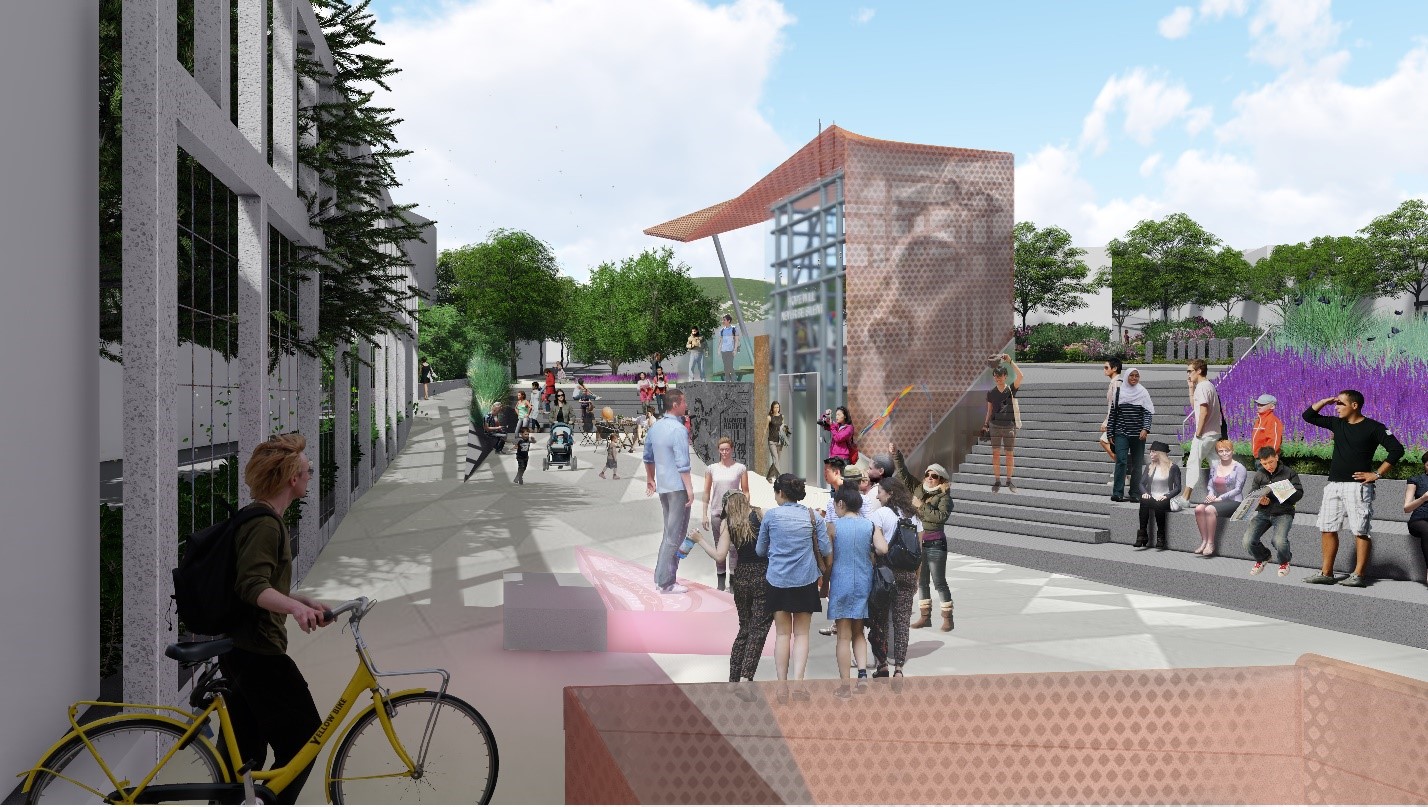 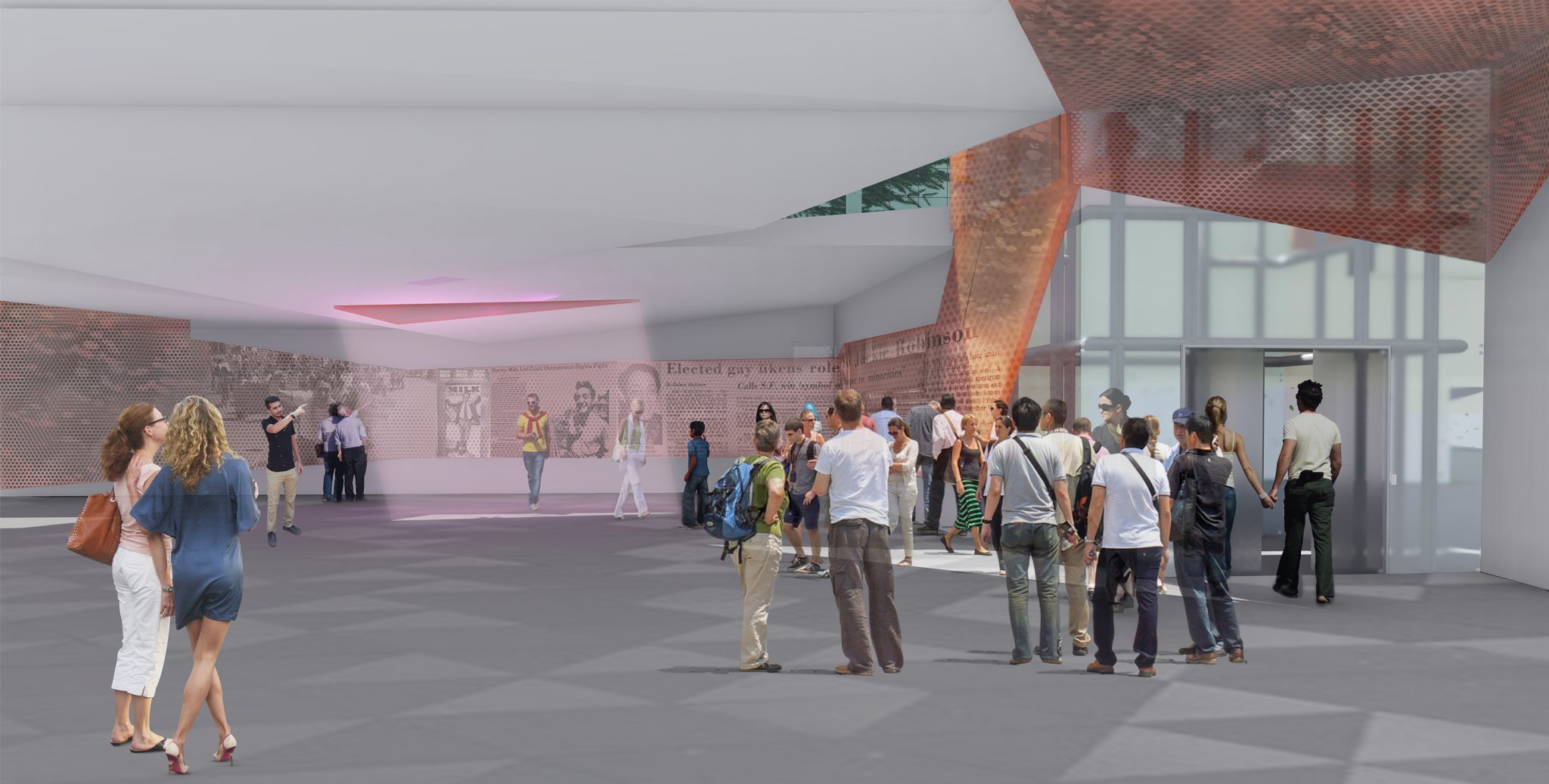 With memorials, we look for ways to honor the person’s life and impact in a way that isn’t about a destination or a static exchange of information. We are also interested in elevating the relentless universality of infrastructure and transportation design language by bringing out what makes a transit station’s particular environment unique. Post-World-War-II transportation infrastructure was all about efficiency and a comfortable sense of recognition—this is what a light rail station looks like, this is what an airport waiting area looks like—but at the expense of celebrating diversity.

This way of looking at infrastructure aligns with our work for San Francisco International Airport. For this project, we teamed with Gensler and Hensel Phelps on the design for the 1.1. million-square-foot Terminal 1 Center Renovation Project, redeveloping one of the airport’s oldest terminals for the needs of 21st century passengers. The airport wanted the terminal to embody the Bay Area as a whole, reflecting its distinctive culture and geography. About four years after we started work on the project, when the terminal was already under construction, the San Francisco Board of Supervisors voted unanimously to rename the terminal after Harvey Milk and include an exhibition in the terminal to commemorate his contributions. (Supervisor David Campos originally proposed renaming the entire airport after Milk in 2013, but abandoned the effort after encountering a strong opposition.)

In our design for the terminal, we strove to transform the paradigm of universality—the functional requirements of airports everywhere—and create a regional, local, and specific set of experiences. As with our other design work, we choreographed these experiences to reveal themselves over time, allowing for reinterpretation and renewal each time someone visits the airport.

One aspect of the design that is unusual is the visual porosity of the terminal—from the airside, you can see through inglenook-like portals all the way to the landside, which is atypical in airports. It’s all about connection, dismantling the barriers. 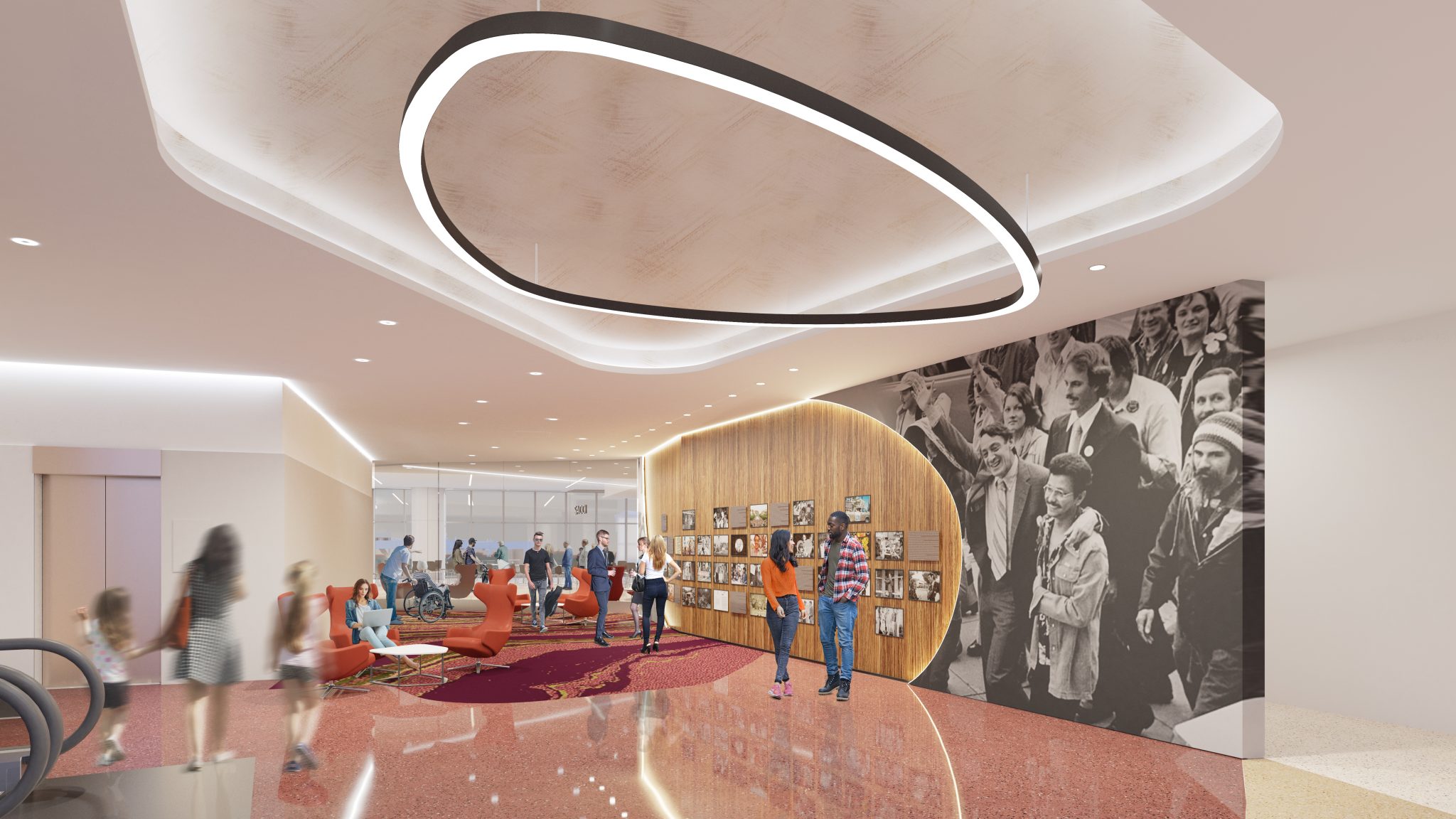 To create a dedicated Terminal to Harvey Milk, the team redesigned the curtainwall to support the new signage commemorating Milk and transformed one of the inglenook portals to house a permanent exhibition. Currently, a temporary exhibition celebrating Milk will be on display at the terminal and will remain until the permanent exhibition will be revealed in 2023.

Working on these three projects has been a wonderful way to get to know more about Harvey Milk. His story is a very American story: a hardworking person creates a business, develops deep bonds with his community, and becomes a catalyst for change. Milk opened a door to the future for a community that the rest of the world wasn’t quite ready for yet.

And now this airport—a building type that typically symbolizes commerce and affluence, a building of connections and transitions—is honoring a hardscrabble radical. His is an inspirational story, and the recognition in the form of this memorial is both astonishing and long overdue.