Like many others, I have been thinking about what part we as architects and designers can play to move forward from these turbulent times. Every day we shape homes, schools, parks, transportation. How can we transform these into more equitable spaces?

We regularly incorporate Americans with Disabilities Act (ADA) guidelines into our work, but I never realized that ADA legislation was a result of years of protests by hundreds of social rights activists. The 504 Sit-In was a disability rights protest that took place nation-wide in 1977. The protests demanded the issuance and enforcement of accessibility regulations. In San Francisco, the protests began with demonstrators standing outside the Health, Education, and Welfare office building. It ended with over one hundred demonstrators breaking into the building, some individuals crawling up the steps because there were no ramps, to sit in the building for 26 days and nights until Section 504 of the Rehabilitation Act was passed.

I had only learned about the 504 Sit-In after a friend of mine named Natalie Fung posted about it on social media. Natalie was organizing a protest for people with disabilities in support of the Black Lives Matter movement. In her post she talked about the 504 Sit-In. I was so surprised that this was the first time I had ever heard of it. I reached out to ask her a few questions about her experience as a person with disabilities. 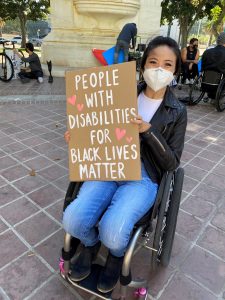 V: I use ADA guidelines for every project I have worked on and never thought twice about where they originated. I always thought designing for people with disabilities was inherent. Your Instagram post for the protest you organized was the first time I learned about the social activism that led to the creation of ADA legislation. What are some things about this history you wish more people would know?

N: The first time I learned about the disability civil rights movement was after watching “Crip Camp,” a documentary produced by Michelle and Barack Obama. It’s about Camp Jened, a summer camp for people with disabilities run by hippies in the 60’s– it was a chance for disabled people to come together and feel normal! Many campers didn’t have friends with disabilities outside of Camp Jened. There, they could come together, share their experiences, and just have fun. A lot of the people who went later became activists & helped start the 504 Sit-In.

V: What are some similarities you see between everything going on now with the activism that happened back then?

V: Why do you think it’s hard for people to understand?

N: I think part of it is a lack of education, but mostly I think people are unaware of their own biases. Before I got injured, I didn’t know anyone with a disability. When I was first injured, I didn’t want to befriend people with disabilities. I thought, “I have my old friends. I’m not a part of the disabled world.” But when I did, I realized that people with disabilities are still normal people.

Another part of it is lack of visibility in the media. I think seeing more people with disabilities on TV or in movies will help normalize disability. Almost 20 percent of Americans have some sort of disability, but that’s not reflected on screen.

N: I think they need a person with disabilities there (during the design process) from the start. I still have problems using ADA bathrooms. Even hotel rooms that claim they are accessible sometimes aren’t. Most hotel beds are way too high for wheelchair users to transfer onto. When I stayed at a hotel with my friend that’s also a quadriplegic, we asked the hotel staff to remove the box spring, and it became instantly easier to use the bed. These little things make a huge difference.

V: Well, I’m so glad to see that you went out and organized a protest. You’re so socially active!

N: I really look up to Judy Heumann, one of the civil rights advocates who lead the 504 Sit-In. She literally got out of her wheelchair and crawled up the steps of the HEW Building in her 20’s. Judy is now in her 70’s, and it’s our turn to make a difference. When I saw the Black Lives Matter protests happening around the world, I felt so helpless. I wanted to show my support, but because I’m immuno-compromised, I didn’t feel comfortable attending a normal protest. I figured that if I felt this way, other people with disabilities probably did too. So I created a socially distant protest that was safe, yet still a part of the larger BLM protest in front of LA City Hall. I thought, if I don’t do it, who will?

ADA Legislation was only implemented in the 90’s. It makes me wonder what future guidelines we as architects will need to consider when designing for the future. If there is anything we can learn from our history, it is that we must consider the needs of the most marginalized user groups. This might involve a process of critiquing our own biases and educating ourselves on the needs of others. Most importantly, it will require us to listen to the voices of others to design a more equitable future. 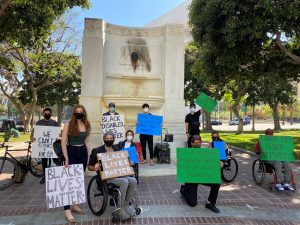 People with Disabilities in support of Black Lives Matter