Lamar Anderson, contributing writer for Architizer, featured the Embarcadero Fragment in her article, “Forget the Hyperloop! San Francisco’s Vintage Plans are the Toolkit of Tomorrow” 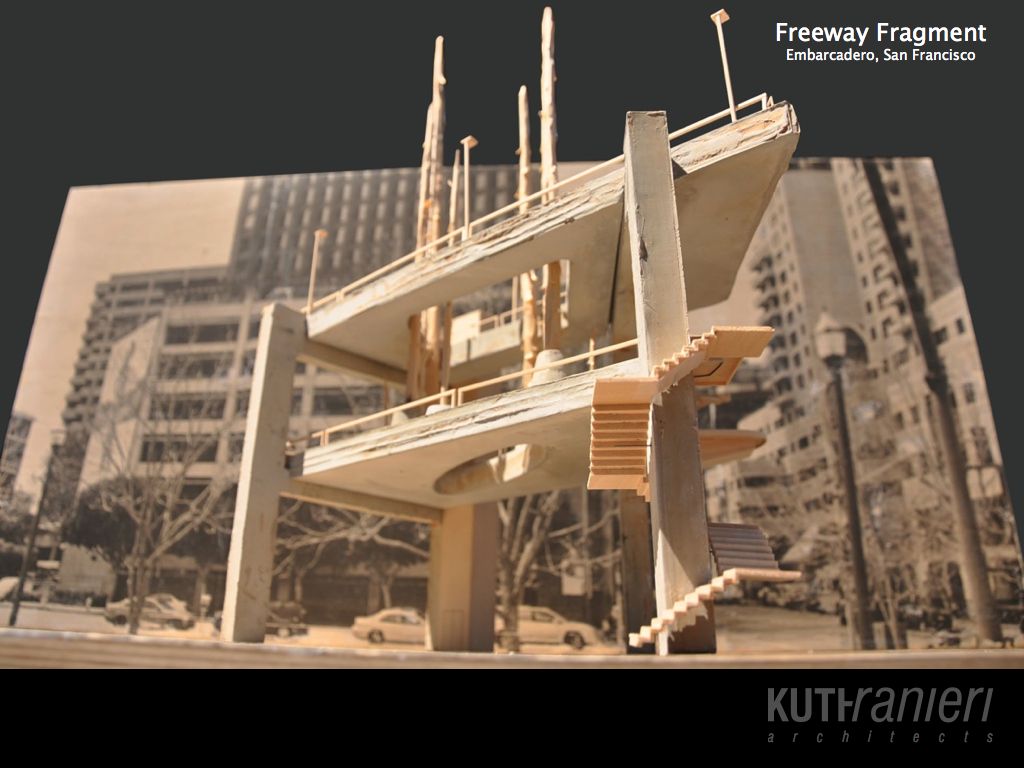 Twenty-four years ago, the Loma Prieta earthquake damaged San Francisco’s Embarcadero Freeway substantially enough to force its closure. There was a lot of debate then about the pros and cons of repairing versus demolishing it.

Americans like to throw out and buy new—tear down and build again. But having spent time touring cities in Europe, Byron and I were struck by the historiography of these urban environments and the resulting delight of complex, rich layers, particularly at the larger scale of infrastructure: systems of transportation and public space. We were very interested at the time in how to reuse and reshape these elements, thereby creating new meaning while maintaining the associations of the original artifact. Architecture can give evidence of a city’s past and present cultures, politics, fashion, and economic forces.

The image of the elevated double-decker, a broken and incomplete freeway, inspired us. And though the freeway was a brutal intervention, it did offer thrilling experiences—a striking urban disruption; an animistic, amphibious colossus that appeared to have crawled out of the water onto the shore; and a privileged place to access the very view that it blocked (a 360-degree panorama of the San Francisco Bay, downtown, bridges, all taken in from the magic carpet ride of the top deck). Integral to the damaging urban consequences of construction were these positive experiences—the things we liked and thought were worth saving.

However, if you’re going to preserve a piece of difficult urban history, one that divided a city from its waterfront, you have to transform it into something beautiful for the public. So we created a proposal for “Freeway Fragment Park,” which would save one bay of the doomed Embarcadero Freeway, about 50 feet wide and 120 feet in length, and turn it into a public vertical park. We were interested in something that could help us to recall the chapters of civic action: the city that originally built the Embarcadero Freeway in the 1950s, the community forces that halted its completion (it had originally been planned to extend all the way through the city, linking the Bay Bridge to the Golden Gate Bridge) by stopping it at Broadway, and its eventual removal.

We chose the portion of the elevated freeway at Howard and Embarcadero because it was slated as a future open-space site. This piece was curved in plan, an elbow shape, and represented a transitional section where the massive infrastructural roadway left the waterfront and burrowed into the city grid. We designed our park with the utilitarian and gritty language of the highway: chain link, fire escapes, street lights, and barriers, with an add-on of landscape. It was about giving San Francisco a unique public experience, one that revealed latent history and educated future generations.

Our proposal remained just an idea, and Mayor Art Agnos gave the go-ahead for demolition of the waterfront freeway in 1991.Today, the Embarcadero is a grand boulevard, alive with bicyclists and pedestrians. The old structure has been forgotten—none of our current students or employees are aware that there ever was an elevated freeway at the Embarcadero.

But last spring, John King approached us about submitting some of our work to an exhibition he was putting together, Unbuilt San Francisco. We remembered our proposal and rummaged in our archives until we discovered a notebook from 1991 containing sketches and a little text. You can see these at UC Berkeley’s College of Environmental Design through November (http://aiasf.org/news/press/2013/04/01/announcing-the-unbuilt-san-francisco-exhibition/). 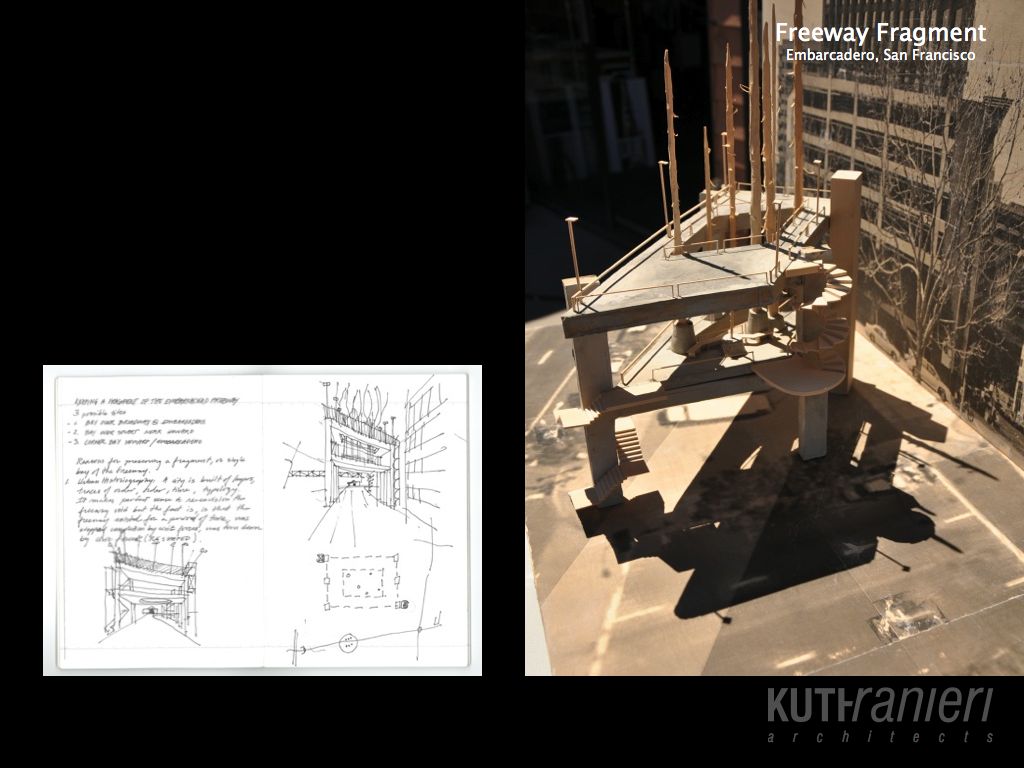 The waterfront renaissance at the Embarcadero has been so successful that earlier this year, Mayor Ed Lee’s transportation policy director Gillian Gillett recommended that the Metropolitan Transportation Commission consider tearing down the elevated northern portion of Interstate 280 that runs from 17th and Mariposa Streets to Fourth and King Streets and replacing it with a boulevard on the surface. Gillett proposed two other ideas: placing Caltrain and future high-speed rail lines underground starting at Cesar Chavez Street, so they could pass beneath Mission Bay, and redeveloping the Caltrain railyards. Together with the demolition of I-280, these actions would remove the barriers that isolate Mission Bay from Potrero Hill and SoMa.

The proposal sparked the Center for Architecture + Design to hold an open competition asking artists, designers, architects, and urban planners to submit ideas for developing parcels of land that would be freed by I-280’s removal (http://www.cadsf.org/seed/).

We saw the opportunity to test and update our Freeway Fragment Park ideas. Our thinking over the last 20+ years has evolved with the sustainability revolution. So, like Freeway Fragment Park, our proposed “Millennial Falls Park” not only repurposes a freestanding portion of I-280 into an urban park that extends the language of the city, but also serves as an infrastructural workhorse, providing public space that integrates water treatment and energy production into the park experience. 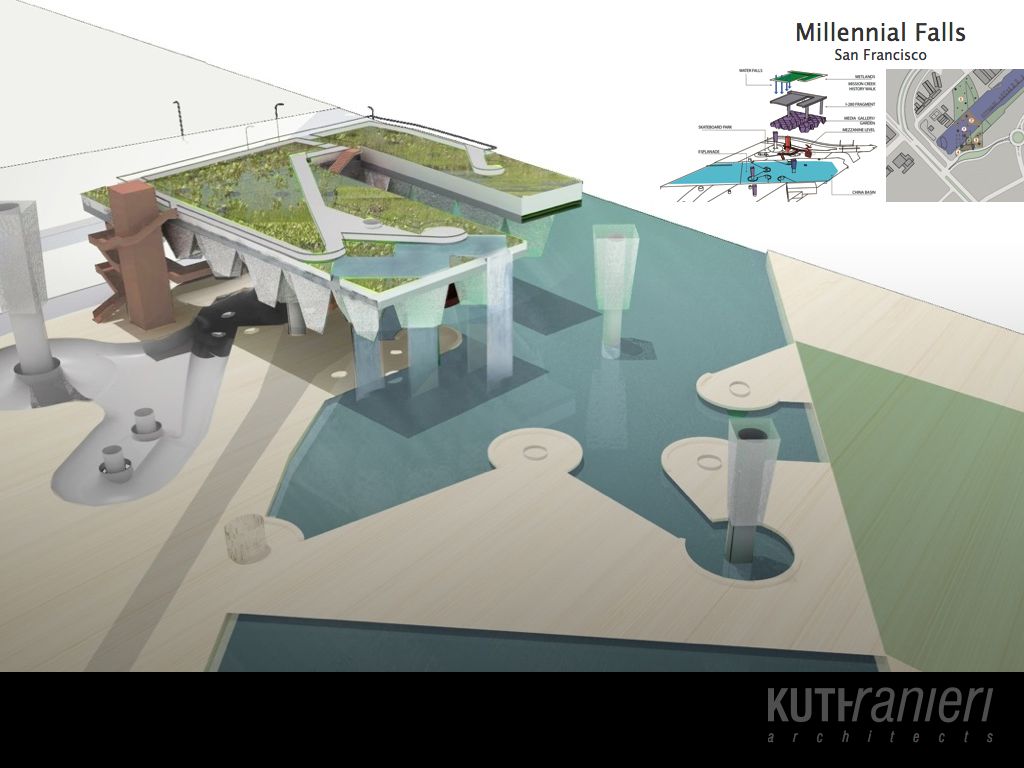 The elevated wetlands would treat greywater and release it via waterfalls before discharging it to the bay. The observation deck would offer city views and a “history walk” telling the story of Mission Creek’s natural world. Powered by the photovoltaic array, the interactive media gallery at the mezzanine level would host exhibitions by environmental multimedia artists.

Mission Bay is emerging as a central hub at the nexus of downtown and SoMa. It doesn’t yet have a memorable anchor, like Coit Tower in North Beach, or the Transamerica Pyramid in the Financial District. Millennial Falls is one idea for creating an urban catalyst that could promote public engagement, sponsor new development, and serve as a destination for gathering and recreation. Repurposing a fragment of I-280 would reaffirm the connection between natural and manmade environments and give Mission Bay a strong identity. 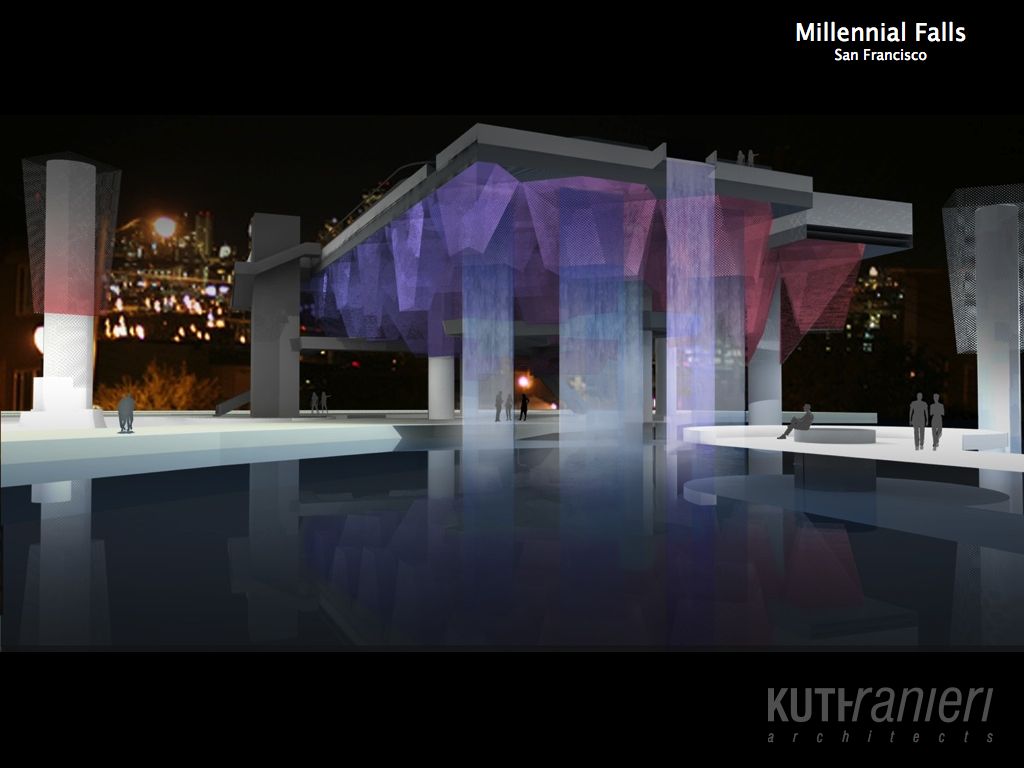