Floating and Energy-Independent Public Safety Architecture: A Strategy of Resilience

Dutch architects such as Waterstudio.nl, Aquatecture, Factor Architecten, and Architectenbureau Marlies Rohmer have been building floating homes for years. 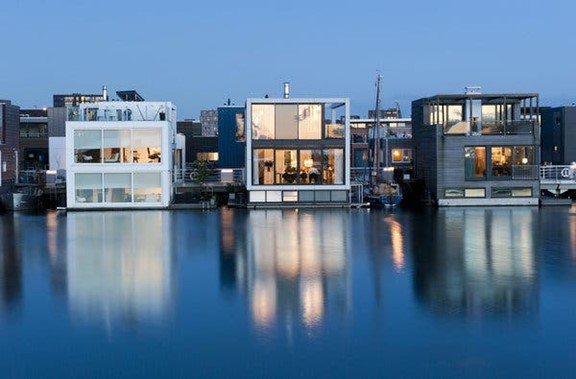 However, to realize amphibious, energy-independent architecture on the large scale of a public building project, existing infrastructure systems and technology will need to evolve. We will need new legislation that mandates energy independence for public safety buildings to protect and secure (physically and technologically) the structure’s energy infrastructure from natural or manmade disasters and maintain public safety operations.

Although there are not yet any built examples of floating safety buildings that also are energy independent, two recent projects—a floating, off-grid office building in Rotterdam and a fireboat station on a barge in San Francisco—suggest the prospect is more realizable than we may have thought.

The new Global Center on Adaptation is a floating and energy-independent office building made entirely of timber and moored at the Rijnhaven Port in Rotterdam, The Netherlands. Designed and engineered to be off grid and carbon neutral, it will float as water levels rise due to climate change. Construction began in spring of 2020. 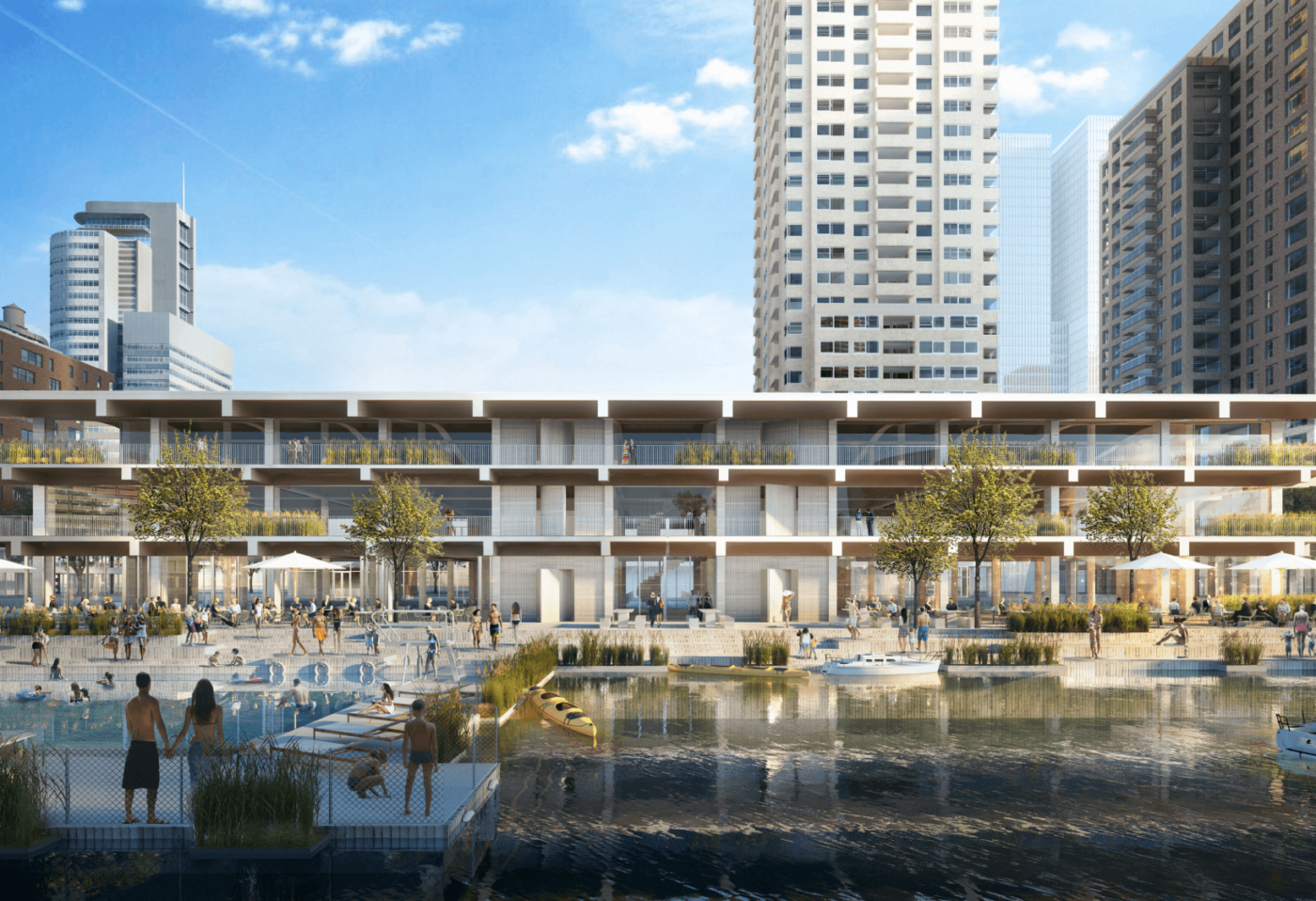 Powerhouse Company Architecture Office led the design team. The building relies on the water of the Rijnhaven harbor basin to cool the building, and the roof is topped with vegetation and solar panels. 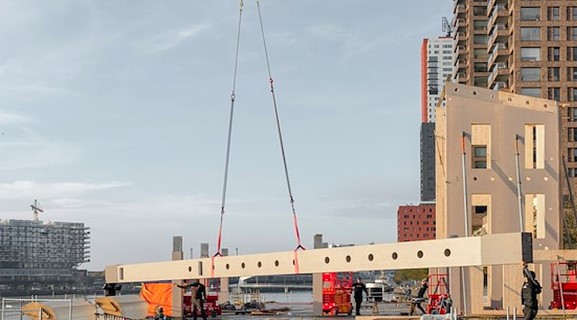 Although it is not energy-independent, the San Francisco Fire Department’s recently completed Station 35 is a floating structure designed to adapt to sea level rise. Designed by Shah Kawasaki Architects and permanently moored next to a historic fire station on the Embarcadero, it sits atop a floating steel barge, allowing firefighters to easily access the station’s fire suppression boats, dive boat, and marine rescue craft, regardless of the tide or sea level. Having been a competition finalist for this project, we have followed its progress closely and maintain great interest in the project type. 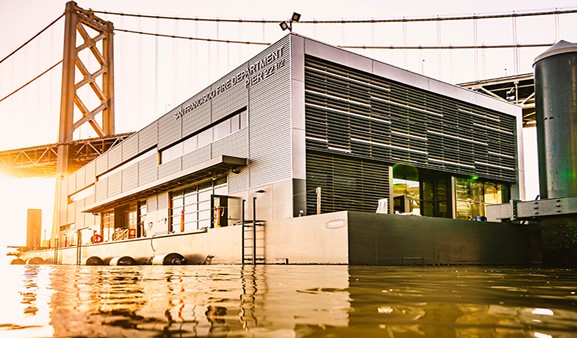 At the time, budget limitations dictated that the barge be manufactured in China and floated to our shores. Going forward, policy could mandate regional construction for public safety buildings. 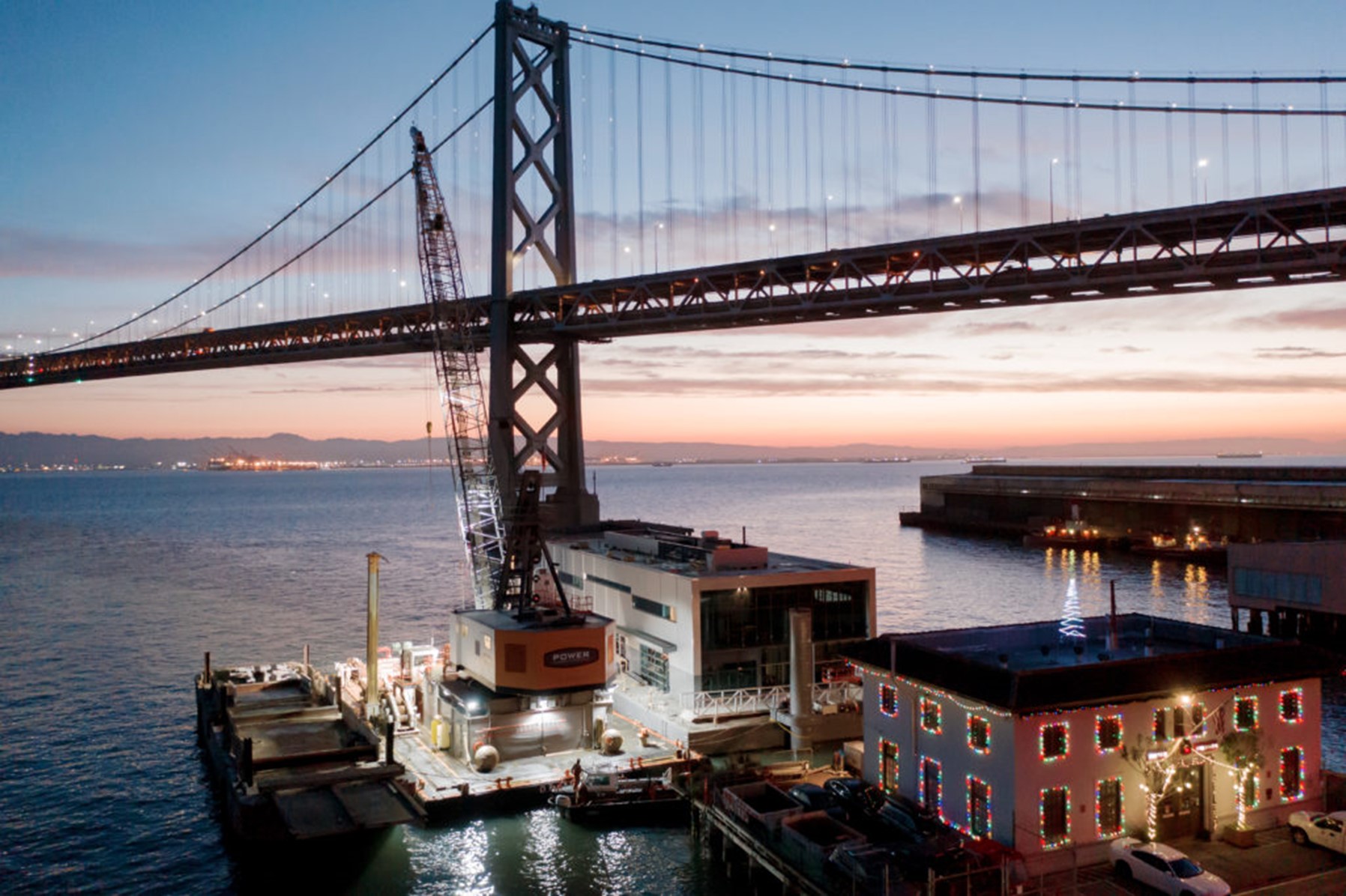 For some municipalities or jurisdictions, the idea of constructing a floating, energy-independent public safety building may seem radical, and it will likely require more funding than a conventional structure. However, in the face of climate change, we have three options: retreat, adapt, or innovatively rescript the terms of current and future shoreline projects and development. One projection suggests that eight American coastal cities will be partly or fully underwater by 2100. It is possible for cities to rethink infrastructure and an approach to building in coastal zones as a viable way to “age in place,” to transform our experiences from living on the water to living with the water.

The sustainable construction and energy independent design principles demonstrated in the Global Center on Adaptation offices, in combination with the floating approach of Fireboat Station 35, set the stage for an integrated and responsible approach for coastal public safety projects. Rising seas from climate change and protection from natural and manmade disasters require that we design future coastal public safety projects to maximize long-term resiliency. However, we can also craft them artistically to extend our cultural landscape, to grow public access to our waterfronts, and to expand our experience of the natural world.

A decade ago, Kuth Ranieri founded a research collaborative, the Deep Green Design Alliance (DGDA). Its contributors explore how the Bay Area can increase resiliency in the context of many gradual and catastrophic changes spurred from climate change, sea level rise and seismic events.