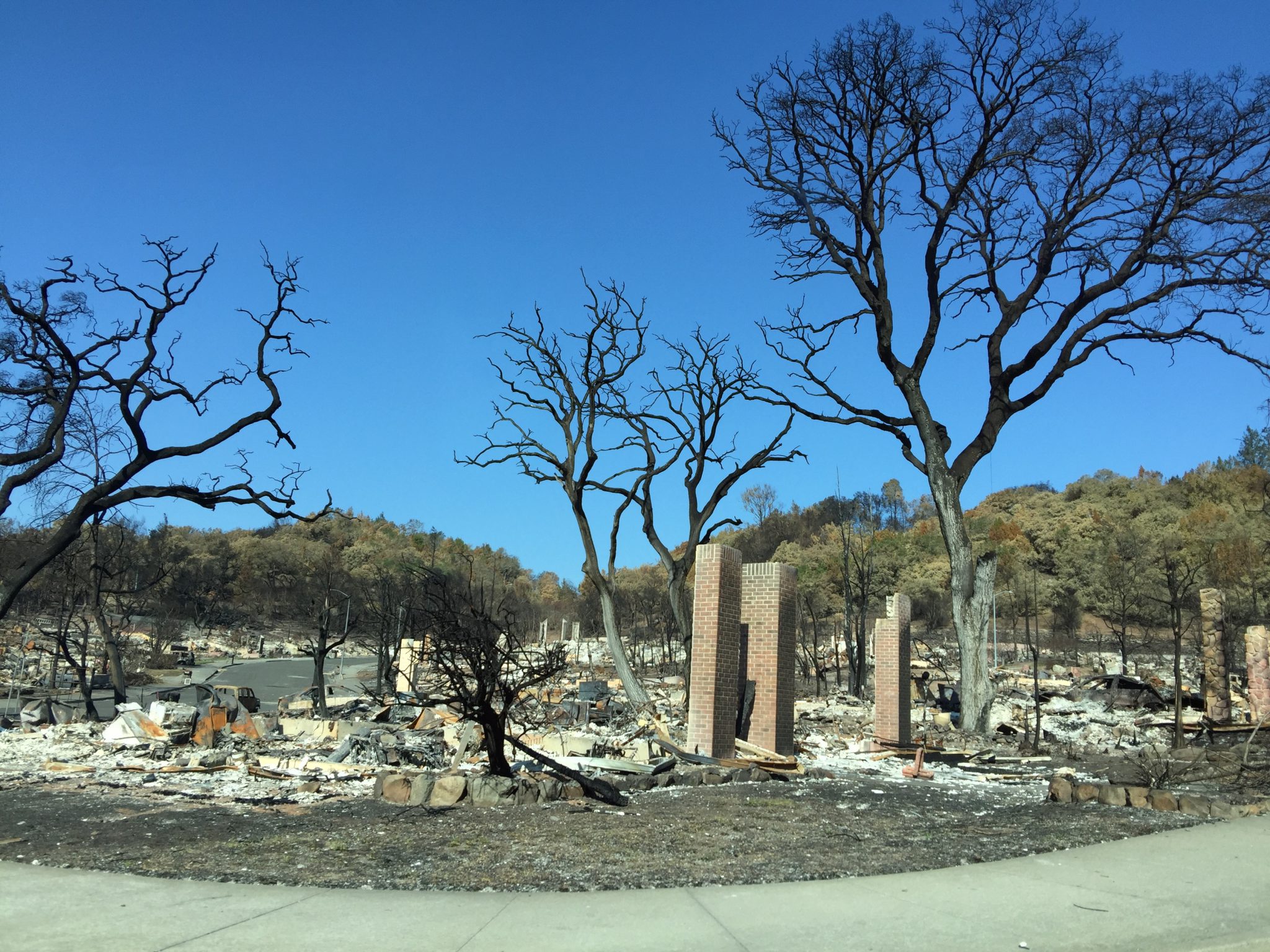 In the fall of 2017, one of our clients lost their house to the Santa Rosa wildfires. Not long after, they asked us to drive up from San Francisco and talk about designing a new house on the same site. The landscape was eerie, all ashes and chimneys and bent, burnt, broken things.

As we began the process of redesign, it occurred to us that in the wake of a terrible fire like this, those planning to rebuild had nowhere to meet with an architect or contractor in the vicinity. That got us to thinking about a way to create a prototype temporary shelter that could be easily erected and provide a place to talk, go over drawings, perhaps even charge a phone or a laptop. Neighbors could use them for community gatherings. More than anything, such a structure would serve as a sign of new life or growth for a devastated area.

Our first concept, which we called Bloom, was a pop-up pavilion that expressed the act of rebuilding using common construction materials, like plywood, 2x framing, and metal hangars. Monumental cutouts of natural forms referenced the local wilderness. But in November 2018, when the devastating Camp Fire hit Paradise, California, resulting in the loss of  nearly 11,000 homes, we realized that we needed to shift from a concept that would be hand-built in situ to a prefabricated pavilion that could be more easily deployed.

Then we were invited to speak at the TECH+ Forum and Expo in San Francisco this spring, and on the first day, R. Platt Boyd IV, founder of Chattanooga-based architectural fabricator Branch Technology, gave a presentation on his company’s work. He shared Branch’s design and fabrication process for the large-scale pavilions SHoP Architects created for the 2016 Design Miami Exhibition. Resembling giant octopuses, they are highly efficient 3D-printed shell structures that are designed to optimize strength with minimal material and to balance manufacturing, transportation, and construction.

This talk inspired us. After the presentation, we talked with Boyd. Then we decided to take another run at our pop-up pavilion idea, this time using 3D printing processes and fabrication. 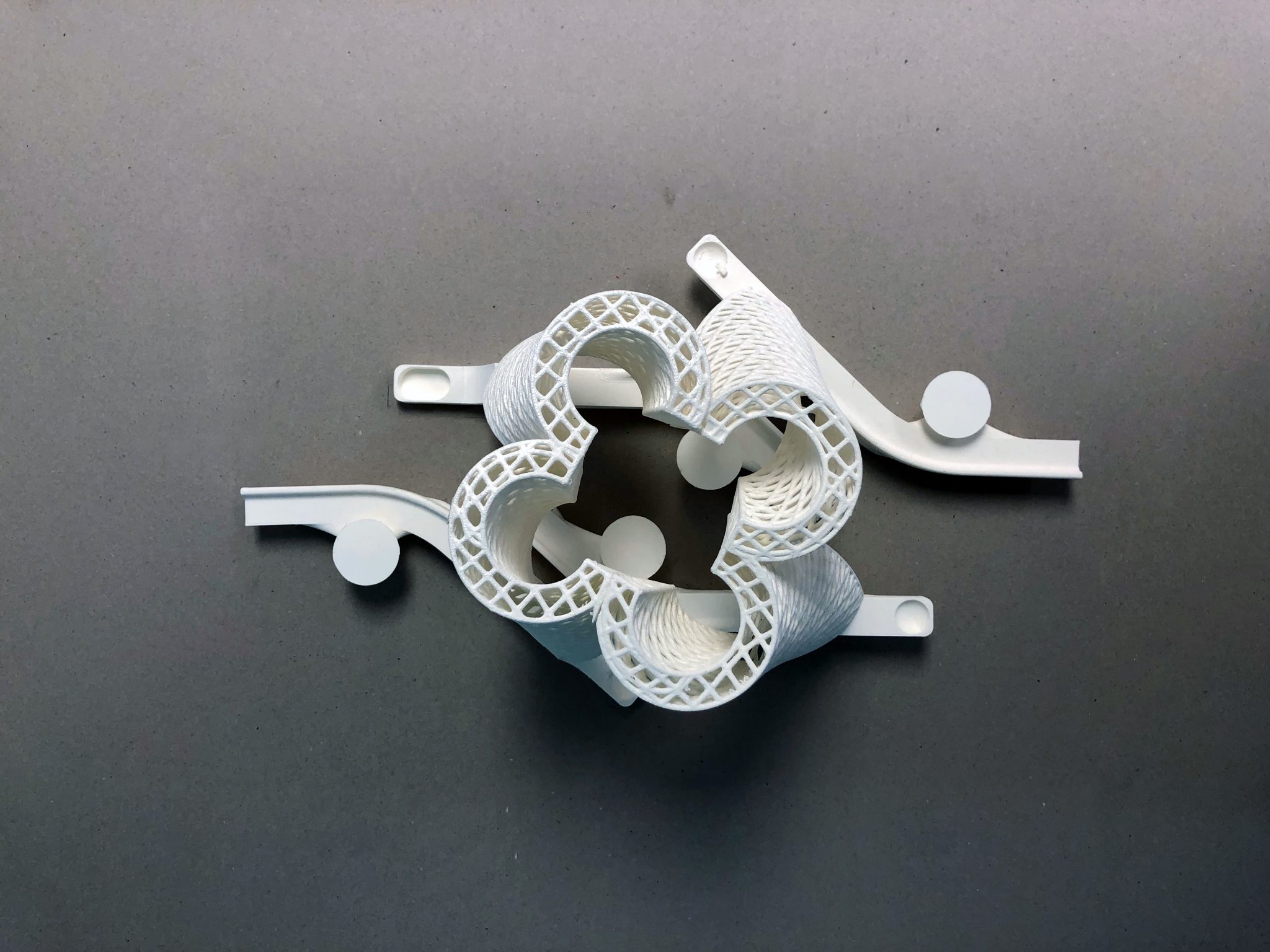 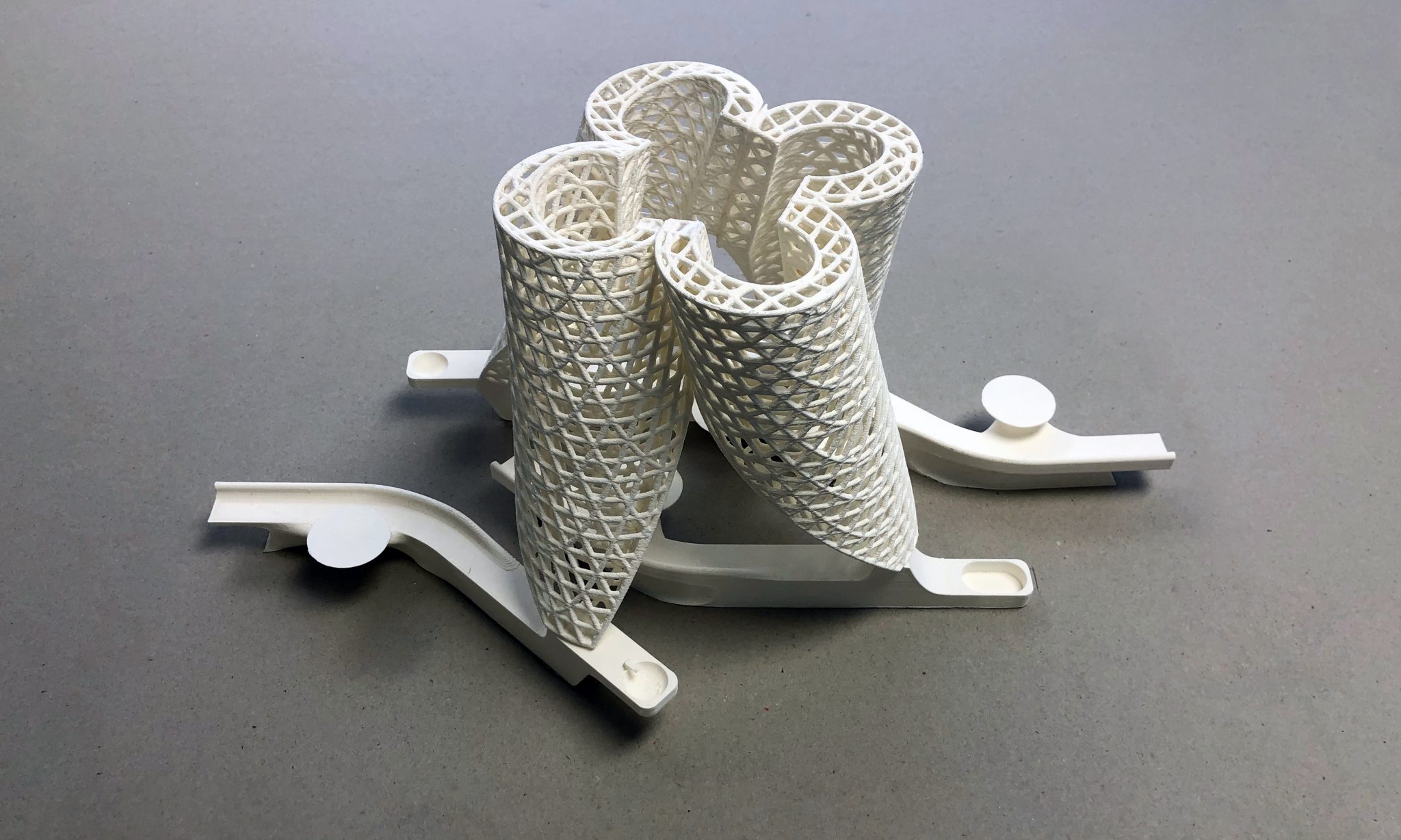 The idea of a four-leaf clover came to us. Given its associations with good luck, we thought it would make a good metaphor for areas recovering from fire disasters, and it would also provide a form with an organic feel.

It would touch the land lightly. There are eight pieces: four foundational solid forms that double as benches/planters, plus four curving pavilion pieces of open dimensional cellular mesh that rise from the foundations. The pavilion pieces join at the top, forming an open four-leaf-clover shape as seen from above. For the roof, we’re thinking of a photovoltaic glass that will let about 30 percent of the sunlight through while supplying power to charge devices. The entire structure is modest in scale, akin to a porch or living space: twelve feet long, twelve feet wide, and twelve feet high. Once it has served its purpose, it is easy to pack up and transport away. 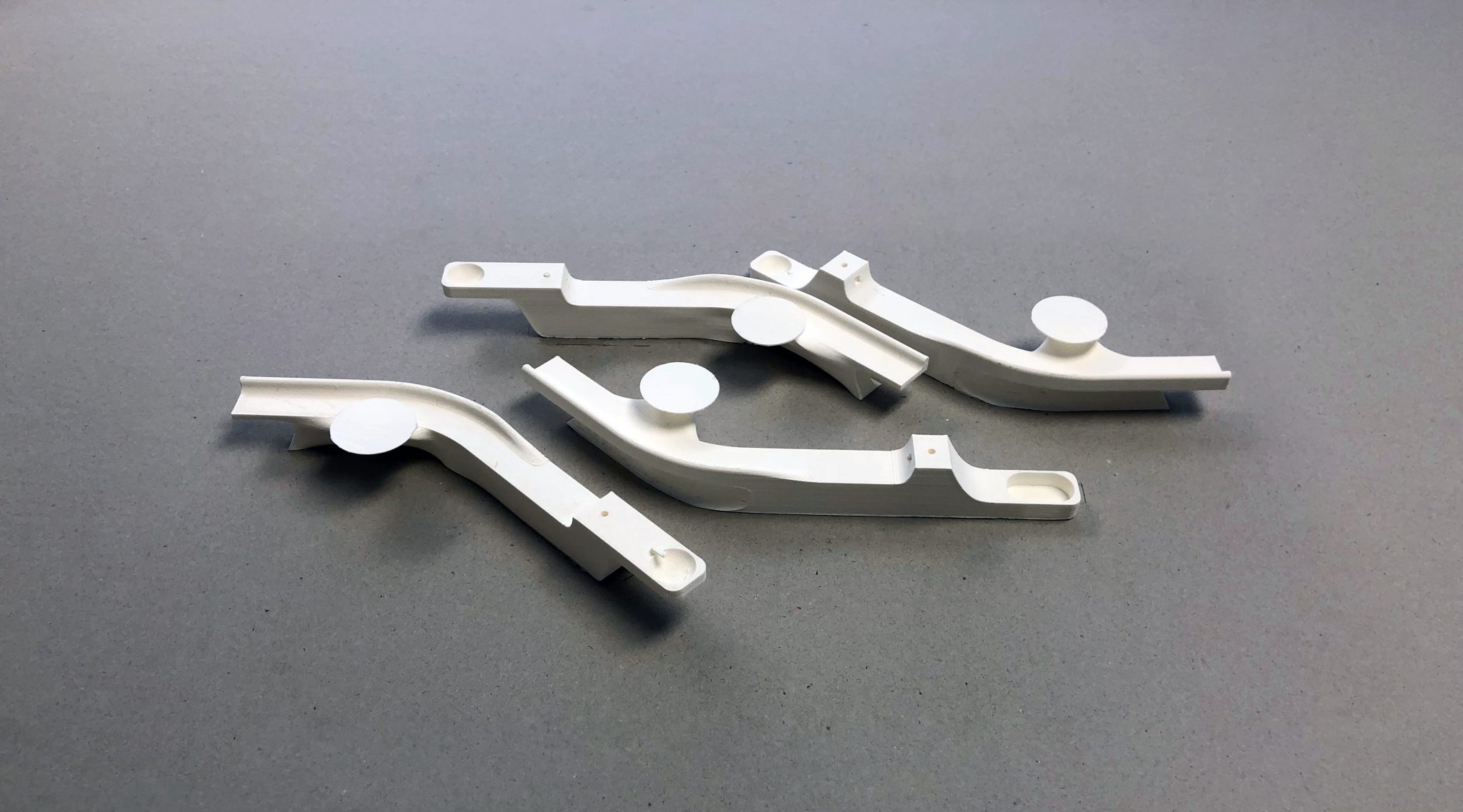 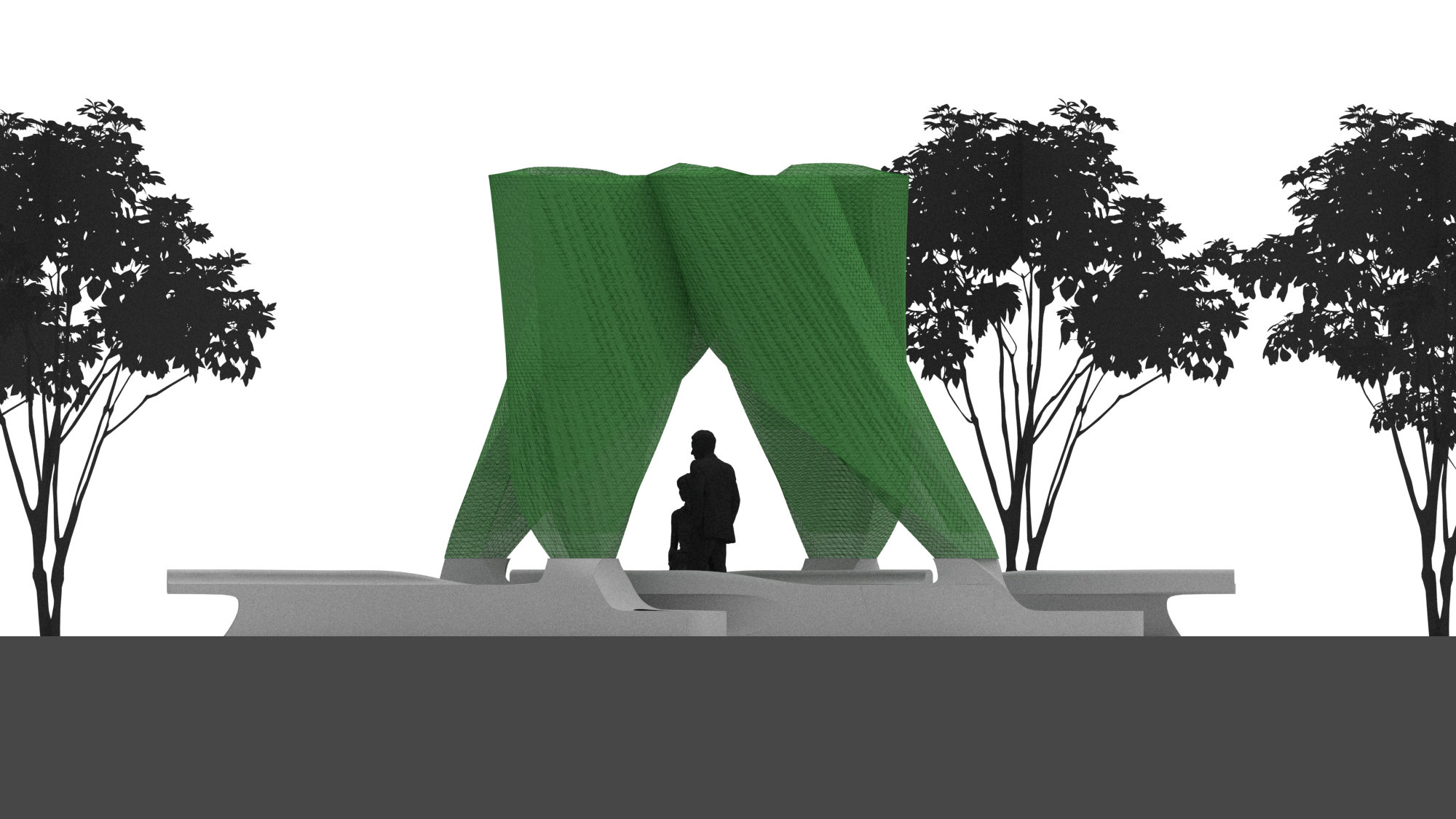 We printed some small-scale prototypes on our in-house 3D printer, then met with Branch Technology (virtually) to talk about the feasibility of realizing this project. Branch told us it seemed highly buildable—they could print a full-scale version of Clover in four pieces. Each one could be delivered to a site on a truck and then connected on site. 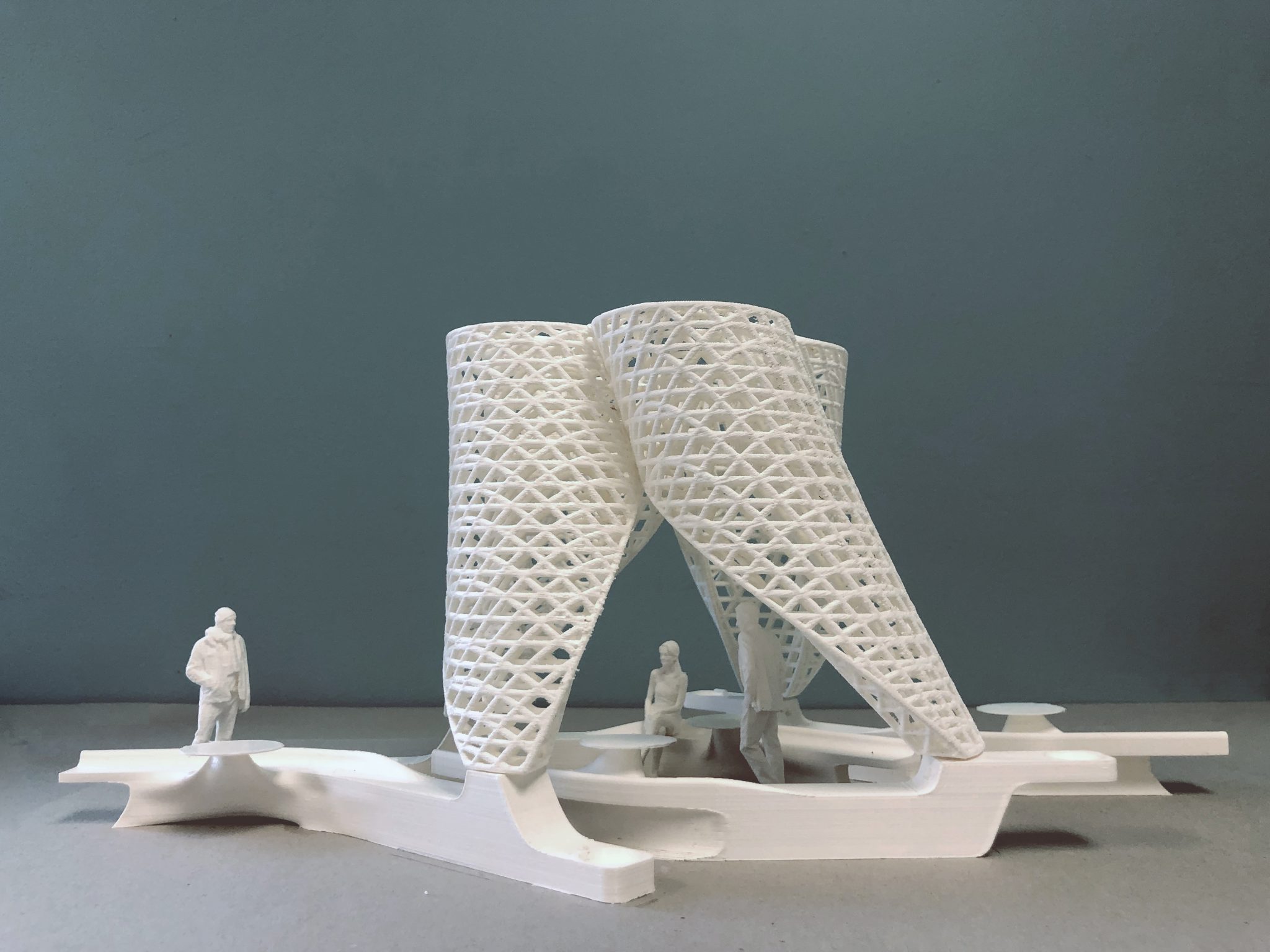 Currently, we’re creating a new 3D model to fine-tune the connections. Next we might see if there’s a municipality that would be interested in funding a quarter-scale prototype that could be put on display. Or we might turn to Kickstarter for the funding to implement the project. 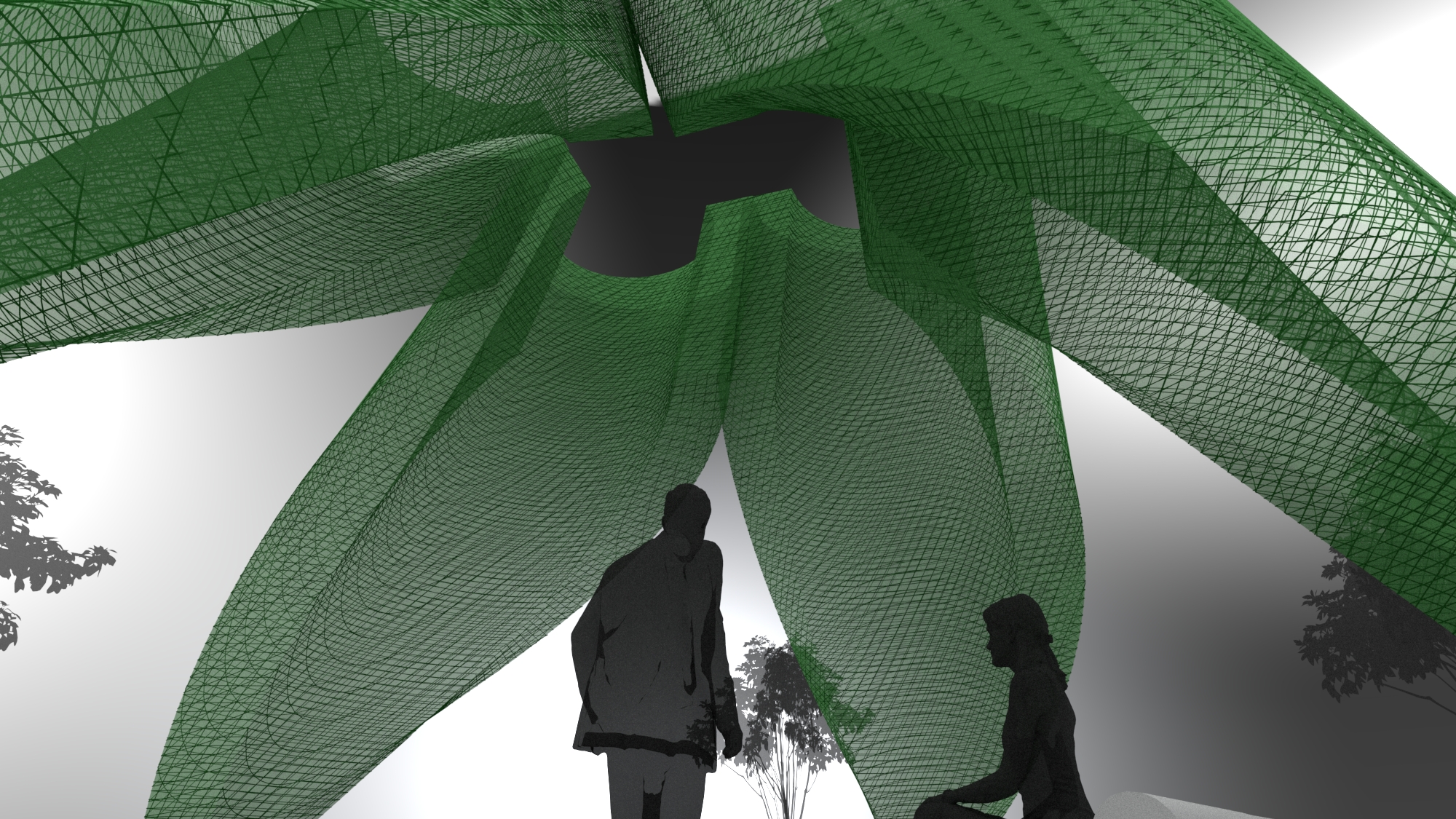 Clover builds on our work with SonoGROTTO, a pavilion we created for the 2016 Market Street Prototyping Festival—designed with modeling software but constructed of cardboard tubes cut by hand. We like to keep pushing the boundaries, experimenting with new ideas, keeping sharp by giving ourselves these kinds of design challenges. And at the same time, as climate change continues to rewrite the rules, designers need to keep innovating to prepare for the future.

Architecture has an essential role to play in giving fire-prone communities the resilience they need to adapt. We intend our Clover concept to be part of the conversation about how we do this. Because these areas could use a lot of luck.